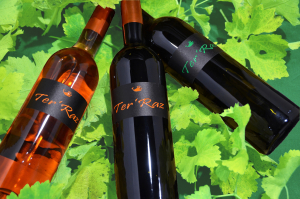 It is somehow typical of the Périgord that one of the oldest producing vineyards of the region, Chateau le Raz on the Montravel plateau, is also one of the most modern. Back in 1610 it was already producing wine and the history goes back even further. In 1450, three years before the decisive battle at Castillon that finally ended English rule in Aquitaine, a man named Barde de St Vivien signed an act to buy land from the lord of la Reynaudie.

This is where it gets interesting. In the Perigord archives on the Privileges of Montignac is a very old marginal note which says that this family of Reynaudie also produced the man who was behind the conspiracy of Amboise, the event in 1560 that launched the bitter religious wars between Catholics and Huguenots that were to continue for nearly fifty years. The plagues and famine the war brought in its wake is reckoned to have killed some two million people, more than a tenth of the French population of the time.

The Reynaudie behind the conspiracy (who also spelt his name Renaudie) had fled to Geneva after losing a lawsuit against an official loyal to the militantly Catholic leader, the Duke of Guise, and the Duke’s brother, the Cardinal of Lorraine. In Geneva, Renaudie became close to the Protestant theologian Jean Calvin. Against Calvin’s advice he decided to return to France to lead a coup against the Guises and free the infant king from their influence. Hundreds of Huguenots gathered in the woods around the chateau of Amboise, where the Guises and King were staying. But the plot was discovered, the Huguenots rounded up and hanged in their hundreds from the chateau walls and nearby trees.

The religious wars ended when the Protestant leader, Henri of Navarre, took the throne in 1589. But his rule as king Henri IV was only assured when he at least nominally became a Catholic, having supposedly said, ‘Paris is worth a mass,’ to allow his victorious troops to take the staunchly Catholic capital. A Prince of the Périgord, Henri’s base had long been Bergerac, when the Protestant cause was strong, and on his chateau in Bergerac (now the Tobacco Museum) there were two celebrated windvanes, of a toothy dolphin wearing a crown, to signal his right as dauphin, the French word for a dolphin) to the throne.

The windvanes somehow disappeared, but you can see them today at the Chateau Le Raz, and that symbol of Henri IV is now the trademark of its wines. Indeed, after bringing in the Edict of Nantes which allowed for religious toleration, Henri was assassinated in 1610, the very year that the Barde family began making wine at Le Raz..

Patrick Barde, today’s descendant, has just been honored by the Hachette wine guide as its winemaker of the year, for the consistent excellence of his Montravel red wines, which have been regularly and justifiably chosen by Hachette as a coup de coeur. He took me to see the historic windvanes when I visited to congratulate him and his team and to taste his impressive array of wines.

What I did not know was that I would be in for a surprise, because I found myself not only delighted by his reds and white but truly enthused by another wine together, an IGP, or vin du pays, of the Périgord, called Ter’Raz. At 5.20 euros a bottle for the reds, whites and rosés, it is an excellent wine for the price, fruity and full, a very convivial and uncomplicated wine but with a good bouquet, generous in the mouth with a charming aftertaste. I bought half a dozen of the whites and of the reds at once. Then I tasted the prestige version, called Ter’Raz No 1, was enchanted, and bought some more.

He started the Ter’Raz venture in 2017 and from 300,000 bottles in 2019 he is now selling 800,000 a year. Patrick cannot grow that many grapes so he set up a kind of local cooperative, where other local winemakers sell him their grape juice (for more than they would be paid by the hard-faced négociants of Bordeaux). Since he blends wines of different years together and gets frustrated by the bureaucracy of the Appellation Controlée system he markets it as a wine of Périgord.

‘Since I don't want to change the way we work, we put as much rigor into making the Ter’Raz as we do into our traditional wines,’ he told me. ‘And it is not only about marketing but understanding the way the market is changing. Young people and women can be intimidated by the wine trade and many of them don't drink reds.’

‘Not me,’ I said, and tasted his delightful classic red Montravel called Les Filles, 2015, so I bought some more at a very reasonable 12.50 euros a bottle.

The local sage, Michel de Montaigne, wrote in one of his famous Essays in the late 16th century that one should always vary the wines one drinks, drinking some for pleasure, some for familiarity and others for their excellence; otherwise how would one ever understand the difference?

Chateau Le Raz triumphantly produces both, and has begun what could well be a profound change in the way that the wines of the Bergerac are made and marketed, now that the region’s wines are growing out of the shadow of Bordeaux. And we have centuries of pedigree to build on. After all, the original Monsieur Barde of the year 1450 came from the village of St Vivien, hard by the splendid Roman villa of Montcaret, which was making wine some two millennia ago.