Another francophile who has not been “tainted” by too much formal education, Leonard is an actor mime, director, chocaholic and forensic fotographer who spends his days in Paris uncovering her secrets to share with us. We recently caught up over coffee at Le Select.

Another francophile who has not been “tainted” by too much formal education, Leonard is an actor mime, director, chocaholic and forensic fotographer who spends his days in Paris uncovering her secrets to share with us. We recently caught up over coffee at Le Select.

When did you first go to Paris?

The first time I landed in Paris was in November 1962. I went for a short visit and stayed seven years. What a different place it was then. My brother came to visit with his new wife. I put them up in a hotel near Metro Palais Royal for $1.80 a night!

What made you return and return again and again?

I didn’t start returning often to Paris, like twice a year for four or six weeks at a time, until I started doing my books on Paris. Never having been to college and only narrowly escaping high school I was a novice at things like research. So I spent 5 years digging in the archives, reading tons of books to get the picture of what happened to Paris under Haussmann and then put into book form with the old photos.

On the Left Bank it is unashamedly Les Deux Magots. Sitting outside I love the view. It’s a great front row seat to the world’s greatest theatre. Inside the space suits me. The light has a scintillating effect that sets my brain vibrating at the right beat. On the Right Bank it’s the Café Dome at Metro Saint Paul. I went there all the time when I was working at the Carnavalet and got very comfortable there

Starred restaurant? Don’t know any. I still live happily in my student mind when in Paris. Live on the cheap. My favorite place for a down home meal is getting a couscous poulet at Chez Hamadi on rue Boutebrie near Saint Michel. This little hole in the wall is perfect. If I want to go uptown I love Aux Petit Chatelet right next door to Shakespeare & Co. owned by Mr. and Mrs. Silly-excellent food at reasonable prices. I always sit upstairs. You feel like your having dinner at the home of a very wealthy friend.

Don’t have one.  My routine in Paris, the places I go, is dictated by my work and I work all the time. I’m a workaholic. I love it. The work is very intense but rewarding because there is so much to do in my limited time. I don’t hang out. Work, dinner with friends, a café along the way. That is happiness.

What’s your favorite park or garden?

Don’t really know them that well. I walk through them on the way to somewhere but don’t lounge. I need concrete under my feet. I’m 100% urban.

What’s your favorite time of the year?

In Paris it’s spring or fall. The mid-summer light is incredible, sure, very soft, pastel. But the heat, crowds and noise are too unpleasant. Plus I had to do a ton of photography in Paris for my books and trees with leaves hide the buildings so I always avoided summer. Mid-late March just before the leaves came out was best. October is always great.

My sources tell me that you have a passion for chocolate and have created a Chocolate Club in the Bay Area.

In 2004 I created the Berkeley Chocolate Club quite by accident. We meet once a month in my Berkeley cottage to taste, rate and enjoy chocolate. All kinds-the good and the lousy. It’s all interesting. Dark chocolate only with nothing in it. Just the chocolate. It’s fabulous fun.

Talk about the genesis of Walks Through Lost Paris and the process of selecting and researching the sites.

In 1996 I came across a book with hundreds of photos of 19th century Paris, a city I did not recognize. I was shocked at my ignorance. How could I have lived there for so long and been so unaware. I began reading everything I could find. I took those photos back to Paris and found the spot where they were taken in say, 1865. The difference was stunning. I assembled them in an order and began taking friends on walks and one thing lead to another. Someone once said, “If you want to learn about something, write a book about it.” That’s what I did.

The first book took five years. It was hard but invigorating. I said I’d never do another one. With no grants, institutional support, etc, it was too hard. Then I began poking around in the archives again and got the bug for a second book. I thought it would go faster with the experience of the first book. Ha! It took seven years!

My postcard book was easier since it’s made up of postcards from my own collection. Also I didn’t have to go to Paris to make the book. It took a couple of years and I had the pleasure of never leaving home.

Your first book was published in French as Promenades dans la Paris Disparu before an American publisher appeared. That must have been enormously gratifying and puzzling at the same time?

Gratifying is an understatement. No American publisher was interested because it was the era of Freedom Fries. They couldn’t see beyond their nose. Then in Paris a friend introduced me to the head of Parigramme. He snapped it up and it became an overnight bestseller. They flew me back for the three-week media blitz of your dreams with radio, TV and newspaper interviews and books signings all day long. That was my second fifteen minutes of fame in Paris. The first was in the 60s but that’s another story.

What projects are you currently working on?

I teach throughout the year at my theatre school in San Francisco, Flying Actor Studio and that is a real project, training people in the art of physical theatre. I’m also working on my Magnum Opus, a piece of autobiographical fiction largely about my life in Paris. Plus I’m working on a second postcard book. My life motto is “All the fun goes to the obsessed,” and one of mine is postcards.

I’m also working up a couple of new, I hate the word, but, lectures on Paris. They’re really shows. I basically show a ton of images of Paris and tell stories.

How has Paris affected your work?

To spend four years studying with Etienne Decroux set the course of my life. My work today  is worlds apart but he gave me my legs. He taught me about the power of intention, the power of not moving, the beauty of the spoken word.

To know Paris over a period of almost fifty years taught me everything about the beauty and the horror of urban living and sensitized me to issues having to do with how humans create the world they live in.

How has Paris affected your life?

ADDENDUM: To be young, living in Paris, being poor and not minding it, to be studying an art with a great master, and to be in love. This is a gift of the gods. That was my life in Paris. 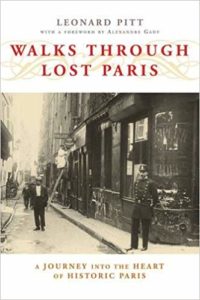 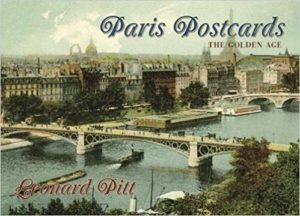 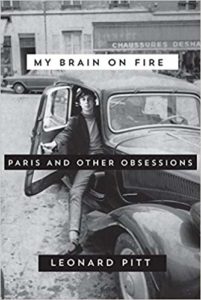