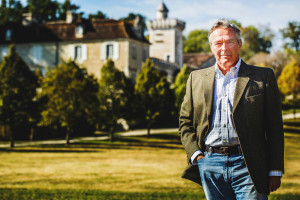 There are moments when you realize how quickly ten years can fly by and how deeply some things have changed. This thought struck me during the tenth anniversary party of the Scheufele family taking over the Chateau Monestier la Tour in the Saussignac, the south-west region of the Bergerac vineyards.

First, it seems like it was only yesterday that I first met Karl-Friedrich and his wife Christine when they bought the vineyard and what was then a rather battered chateau and an antique chai with old-fashioned equipment. The chateau itself has been transformed inside and restored on the outside. The parkland has been more than just well-tended. Six hundred new trees have been planted and the place is full of wildlife, with a rabbit warren and hares bouncing around the trees that border the lake, and deer in the woodlands.

But that is just a footnote to the revolution that has taken place in the vineyard. There is a new chai, tasting rooms and reception rooms, all in keeping with traditional designs. Above all it houses sixteen new stainless-steel vats, each tailored to a single plot of vines, and each equipped with its own thermal system to manage vinification.

New vineyards have been planted, including a plot of chardonnay vines. The family consulted the old Napolenic-era maps of the land and found that one slope leading down to the lake had not then been planted with vines. They made a survey of the soil, found that it was too thick in clay to be much use to the vines that had some decades ago been planted there so they dug them all up.

Above all, the entire property has now been certified organic and the vineyards have become dedicated to the bio-dynamic system of wine-making. I admit that I was a decade ago sceptical of this system,. Some of its hallmarks, such as burying cows’ horns filled with manure and yarrow plants, spraying the vines with a tea made of nettles or camomile, along with a careful assessment of the stages of the moon, smacked to me of alchemy.

Now I know better, thanks to friends like Sean and Caro Feely at Chateau Feely, also in the Saussignac, who are persuasive and passionate advocates of the system and produce wines that justify their belief. And the glorious new wines from Monestier la Tour are the clinching argument.

At the 10th anniversary party, Karl-Friedrich offered us to taste not only his recent bio-dynamic wines from 2017, 2018 and 2019, but also the original wines from 2012. The contrast was stunning. The new wines are alive with fruit, first in the nose with an appealing bouquet, but then in the long aftertaste. The mouth-feel was rich and complex and deeply satisfying.

Then I went back to the 2012, a wine I had admired at the time. The nose was thin, the mouth-feel too crisp and sharp, the aftertaste was - I hate to say chemical - a little sour. Comparing the old and the new, I felt that it was not just the wines that had changed, but my own palate.

I had breakfast the following morning with Michael Schuster, a real expert who has been teaching wine in London and Bordeaux for more than thirty years and produces the World of Fine Wine. Over the croissants he commented on the difference between the 2012 and the later vintages and I said I had written down the same in my own notes.

‘I think our tastes and perhaps our expectations have changed,’ he said, and we went on to discuss the extraordinary cone of silence around the wines of Bergerac. Those of us who live here and drink them regularly might not realize just how lucky we are to be enjoying wines that are so little known internationally and so cheap by comparison with more famous wines, or those with more effective marketing.

Probably under the impact of the celebrations and the splendid dinner and the excellent wines we enjoyed, I scribbled down some notes between tastings and courses, some of them more flowery and romantic than I might write in the cold light of morning. Nonetheless, I stand by every word.

‘The old wines were good in their way, but somehow I got the impression of a handsome woman putting on a bold face and dressing impeccably to mask an inner constriction, as though feeling locked into a less than happy marriage,’ I wrote. ‘The new wines of the Scheufele era are the same woman, happy and free in the freshness of youth. She is in full and generous bloom, and delighted to let the world know it.’

Bear in mind that 2017, 2018 and 2019 were not the most helpful of years in the Bergerac. The 2017 was a fitful summer, with much rain although it cleared up well for the harvesting. The 2018 vintage was marked by a rainy spring but a much better summer. And the 2019 was hit by the rain and frosts in May.

There were two other important factors. The yield in 2017 was 45 hectolitres per hectare; in 2018 and 2019 it was 30. Moreover, the 2012 Merlot was picked in the third week of October and the 2014 harvest in the second week. In 2016 and 2017 and 2018  picking began in the first week of October,  and then 2019 in the fourth week of September. A handful of harvests do not make the full case for climate change, but given all the other signs that we have of early ripening, it is persuasive.

I remember tasting with Karl-Friedrich the first wines that Monestier la Tour made after the transition and they were, as he noted at the time, pretty grim since the soil was reeling under the impact of no chemicals and the new organic methods. He had done a blind tasting with his family, he confided, and they all scored their own wines as the last enjoyable of the wines being tasted.

How that has changed! The wines are winning international prizes and Hachette stars. It helps that the Scheufeler family is wealthy, whereas other, smaller vineyards (like the Feely terroir) went through a similar transition with only a fraction of Monestier la Tour’s resources. And Sean and Caro Feely did it all while raising two young children. But that is the heartening reality, that great and small vineyards can produce stunning wines with the bio-dynamic system, by working with nature rather than throwing in pesticides and fungicides against it.

Count me as a convert. And try the wines of Monestier La Tour. The Bergerac red, called Cadran, is 10.50 euros a bottle, and the grander Côtes de Bergerac red, Monestier la Tour, is 17.50 and the white is 15. These are mostly made from Cabernet franc and Merlot, with just two percent of Malbec. They are making a special new white wine this year, 90 percent Semillon and ten percent Muscadelle, which is already tasting well. The Bergerac has a new jewel.