Toulouse -Lautrec at The Grand Palais 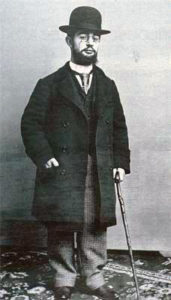 There is a big, gorgeous, exhibition at the Grand Palais celebrating Henri de Toulouse-Lautrec (T-L) Twelve distinct themes wind along two floors. Like the Leonardo exhibition at the Louvre, it is an extremely popular show, but because the space is ample, you never get the feeling of being crowded or being on a conveyor belt glancing at art from afar. You can stop and read and gaze and muse and consider whatever interest you. Of course, what you expect to find, you will find, but you will also be introduced to themes that will be new to you or presented in a way that is new. I think we all know, more or less, T-L’s biography.

His parents were first cousins and lest you think they married for love, rest assured it was to consolidate the family’s financial resources. His father’s brother married his mother’s sister for the same reason. Sound economic decisions those two marriages might have been, but recessive genes resulted in T-L’s malformation and might have been why his younger brother died at age one when Henri was four. It was then that T-L’s mother decided she had had enough and the marriage, or at least the baby making phase of it, ended and his parents separated. Henri’s rare genetic disorder, pycnodysostosis, causes brittle bones and poorly developed leg bones. At 13, he broke his right femur and a year later, his left femur. His extended recuperations forced him to find sedentary activities, and soon enough his artistic talent became apparent. When fully grown, Lautrec had a normal torso but very short legs. When he was seated, he could look fellow diners in the eye, but when he stood, he was only 4’8” tall. He walked with difficulty and with a cane. Yes, he was an aristocrat, but because of his size and deformities, he considered himself an outcast and found solace with marginalized people. T-L died at age 36, his body worn out from alcohol and syphilis.
During his short life, T-L was a prolific chronicler of modern life. From 1884, T-L lived in Montmartre, an area known for its cabarets, bars and brothels. Through portraits, prints and posters, T-L revealed and reveled in the bohemian life of which he was both participant and witness. If you are looking for posters, copies of which might have adorned your dormitory room back in the day, you will not be disappointed, the poster of Aristide Bruant in his iconic black hat and red scarf 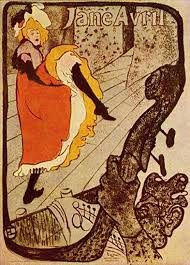 is here as are the equally well known posters for Jane Avril, star of the Moulin Rouge.

A marvelous circus performance with preparatory drawings gives you a sense of how T-L developed his ideas. ( 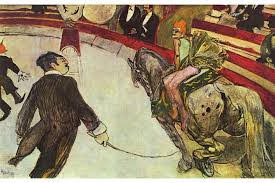 Snippets of John Huston’s 1952 film ‘Moulin Rouge’ depicts T-L sketching girls dancing the cancan with the same verve and energy they bring to their dance. https://www.biography.com/artist/henri-de-toulouse-lautrec
A while back, I wrote a review of the exhibition, ‘Degas at the Opera’. I told you that Degas’ depictions of ballerinas practicing, stretching, and collapsing from fatigue, have always struck me as voyeuristic, especially those images in which old men in black suits, seated on chairs, watch. 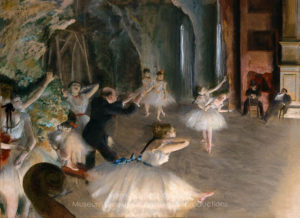 To me, those images have always seemed to be violations, especially as I wrote in my review, of the young girls in the corps de ballet who were paid so poorly that they typically had no choice but to accept the leering advances of these old men to survive.
So, now we find ourselves looking at drawings and prints by T-L which take as their subject, prostitutes in brothels. 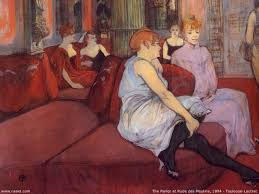 Degas’ influence on T-L is undeniable - the photographic sense of immediacy, the truncated angles and the shared appreciation for Japanese prints. Yet in T-L’s depictions, as one critic has noted, we see a “haven from the outer, male-dominated world.”  In the maisons closes, (brothels) “…time stands still, men are absent and women are affectionate with each other….” 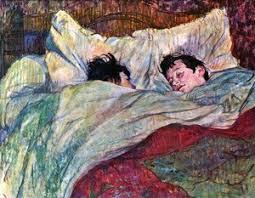 T-L doesn’t judge, he doesn’t demean. https://www.nytimes.com/2005/03/18/arts/design/lautrecs-life-high-and-low.html. While his relationship with some of the women was transactional, unlike Degas’ ballerinas, T-L saw the prostitutes as real people, he whiled away the time with them, playing board games and card games. He remembered their birthdays with presents and accompanied them to restaurants, circuses and the theater. T-L produced an entire album of images of prostitutes, called Elles. It was not prurient. It was not lurid. It was not successful.

http://wondersmith.com/heroes/lautrec.htm
I recently wrote a review of an exhibition devoted to the art critic and collector, Felix Feneon now at the Musee de l’Orangerie (moving to MoMA in New York at the end of March). I didn’t know much (anything) about Feneon before I went to the first of two exhibitions about him this summer. The Orangerie exhibition celebrated Feneon’s prescient championing and collecting of avant-garde art and artists, among them, T-L.
So, as I wandered through this exhibition, I was delighted to see how many times and in how many ways the Feneon exhibition enhanced and augmented my appreciation and understanding for the T-L exhibition. And I reveled in the synchronicity of it all. I mean, where else but Paris could two grand exhibitions on two different people, one of whom I was more or less meeting for the first time, have so many connections and reverberations. (Not to mention Degas whose work was so important to T-L) There is a caricature by T-L of Feneon at the Feneon exhibition. My companion and I tried to determine how many brush strokes were involved. Not many, we decided. Skinny face, goatee. Judge for yourself. 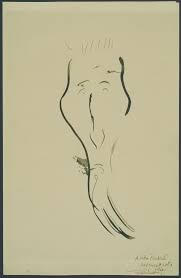 Another image by T-L with Feneon is one of a pair of decorative panels that T-L painted for his friend, La Goulue, the cabaret star of the Moulin Rouge. When the entrepreneurial spirit struck, she went out on her own and set up a booth where she could dance at the Foire du Trone.  She asked T-L to paint two panels, one for the entrance to her booth. One panel, entitled ‘The Moorish Dance’ shows La Goulue belly dancing, a group of behatted men looking on, Feneon among them. He stands at the lower right, in profile, next to Oscar Wilde, a friend of both Feneon and Lautrec. 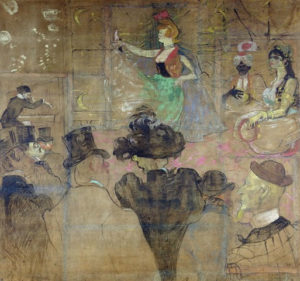 Another intersection between the two is the avant-garde journal for which they both worked, La Revue Blanche. This journal published fiction by Ibsen, Flaubert, Proust and Tolstoy. It reproduced Japanese prints and original by Bonnard, Vuillard and Serusier, etc. Articles on political and social issues appeared, in support of both Dreyfus and Oscar Wilde. In 1895, the owners of the journal commissioned T-L to create an advertising poster. Lautrec chose one of the owner’s wife, Misia Natanson, to adorn it. 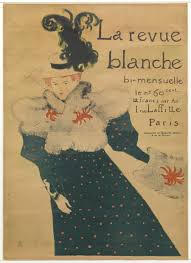 The initial design showed Misia ice skating at the new ice rink on the Champs Elysees The final image is far more radical. It has been cropped and all background details deleted. Only strawberry blond Misia, in a white hat with black feathers, a blue dress with red dots, a white fur stole and muff with red decoration, has survived. Flat like a Japanese print, ice skates and skating rink are inferred by Misia’s posture. T-L became a close friend of the Natansons and was a frequent guest at their home. They even tried to stage an intervention at one point, inviting T-L to stay at their home and making sure there was no alcohol in the house. It might have worked were it not for T-L’s frequent trips to the bar in town.
Let’s consider one more theme: the Dandy, which I was completely surprised to see. When I think Dandy, I think England. When I think Flaneur, I think France. The curators of this exhibition used the terms interchangeably, which puzzled me. According to the curators, T-L was “(d)rawn to London, and made no secret of his taste for English culture”.“This was evident, in his powerful boulevardiers (or flâneurs) series of 1887-93….In them he makes his figures eloquent, whether seen from behind or the front, hands often plunged in pockets, hat and cane adding a kind of virile assurance.” 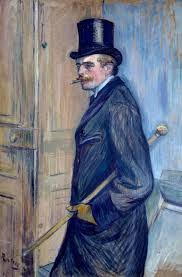 Flaneur. Dandy. Boulevardier. I am not prepared to lump them all together. A Flaneur, following Baudelaire, is a man who wanders the city observing but not observed. He roams at will, soaking up the atmosphere and the scenery. Which is why, even today, a woman can’t really be a Flaneuse, a woman is the object of the male gaze, it is the woman who is on display. A Dandy, it seems to me, is defined mostly by presentation and destination. His ‘uniform’ is a long coat, often with attached cape, a top hat and a cane. And typically, men dressed like this have a specific destination in mind, as Feneon did when he wore the uniform, an art opening or book reading, for example. Boulevardier is someone who wanders the boulevards which didn’t exist in Paris before Baron Haussmann ripped out vast swathes of medieval Paris beginning in the 1850s, and replaced those quartiers with grand boulevards along which these men could stroll. So, a Boulevardier is a Flaneur because he wanders with no set destination but he could, I suppose be dressed as a Dandy. 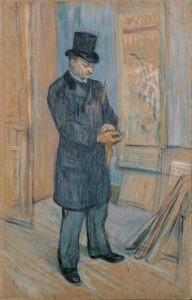 One of the Dandies in this exhibition is T-L’s cousin, Louis Pascal in a portrait from 1893.

(Figure 15) A rich banker, Lautrec depicts him in the Dandy uniform - long fitted coat and top hat, with a cane under his arm, chomping on a cigar. T-L, in a letter to his grandmother wrote, “I am told you enjoyed my handsome friend Louis’s charming ways and patent leather shoes. You ought to find him an heiress and throw her into his arms. He’s not much good, I’d say, for anything else.” www.forbes.com...#fb9f72578c07

An American angle? Sure. Think of all the American heiresses (or their fathers) roaming Europe at the turn of the 20th century looking for a suitable young man with a title and those same men looking for a suitable young American woman with money. The heiress to the Singer sewing machine fortune comes to mind, as does Lady Cora from Downton Abbey. I met one of the granddaughters of the Singer sewing machine fortune once. She told me that her grandfather’s will forbade his daughter from using even one centime of her inheritance to restore her husband’s inherited chateau in Normandy. And we know that Lady Grantham’s entire fortune was sunk in her husband’s estate.
This is a great exhibition and you really should go. Another theme to check out the advertising posters T-L created for an English bicycle manufacturer. 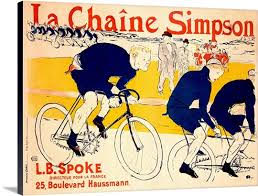 And look at his studies of jockeys and horses, so similar to those by Degas. There is so much to see here. New and familiar. Enjoy.

'Anyone who wants to know what Lautrec was like and why his art is important should read the beautifully illustrated life by Julia Frey, ''Toulouse-Lautrec: A Life'', which is based on unpublished letters and 10 years of research.” (I am currently reading the author’s book on another of my own favorite artists, Edouard Vuillard and I will be writing a review here very soon.)