THE EMPIRE AND THE FIVE KINGS 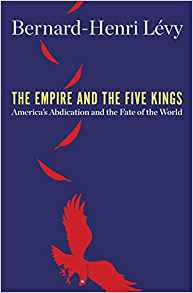 I received this free ARE copy from Terrance Gelenter’s Paris Readers Circle and much enjoyed this lively narrative through today’s geopolitics.

French public intellectual Bernard-Henri Levy (BHL) provides a grand overview of civilizations in tumult if not overarching conflict. He positions five rising powers, the Five Kings in the title, of Russia, China, Turkey, Iran and Sunni radical Islam as challenging the American empire, increasingly the detached leader of the West. The West, of which America is and was the champion, is quickly becoming an empire of nothing, of” nihilism squared and a cavalcade of kitsch” (one wonders if BHL has been to Mar-a-Lago?).

Levy sets his narrative argument out against a backdrop of piquant historical example and his own wide-ranging personal experience of having seen much of the troubled world of today first hand. This is a cri de Coeur of a historically informed witness, one able of fluently putting incident and episode into grand historical context.

The actionable premise is that the world has entered an era of “wide-ranging rebalancing of prestige and deterrent power in which a sapped America ceded its influence while its emboldened adversaries pushed their advantage and improvised an unprecedented redistribution of the systems of authority.”

The book’s title comes from the Bible story about a “war of the empire against the five kings.” The empire is of course America and the five kings are Russia, China, Turkey, Iran and Sunni radical Islam fed by Saudi Arabia. The common denominator among the five is their taking of seats at the world table of power at the expense of Kurdistan’s brave and noble Pershmerga, that quasi-country’s highly combat capable militia. The activating mechanism is that this is a world where the United States no longer matters, which has been the recent arc of the northern Middle East. This may also be the future arc of American influence and power, if not concern, east of modern-day Greece relative to the Muslim world. One clearly senses that the power duo of Russia and China is the rising external power in the Greater Middle East, but that these imperial powers will also have their difficulties in this intractable region.

Levy puts the focal point of the action at the Iraqi city of Kirkuk in the fall of 2017 when the Americans abandoned and betrayed the Kurds. The Iraqis rode into Kirkuk in American-provided Abrams tanks and the Americans said nothing when “Kurdish houses in Kirkuk were gassed and ransacked, women raped, people tortured.” Levy puts this in a long line of western betrayals starting with the Popular Front government in Spain in 1936. And Munich in 1938 of course.

Levy is a grand partisan of the Kurdish cause and he positions these Athenian-like Kurds against all the other nefarious actors and poisonous movements of today’s Middle East. An existential question posed is whether there is some liberal form of Islam that could be incubated to lead towards some productive accommodation with modernity for this ancient religion. It’s hard to see this future from the incidents recounted in this book.

Answers? Levy concludes a fresh reinvention of Europe, an affirmation of Europe as an embodiment of the ideas of freedom and fraternity, is required. So, all eyes should be on the May 2019 European parliamentary elections and whether the Americans truly sell out the Kurds in the Middle East.