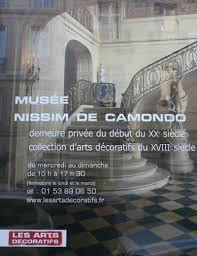 It is said that there are no Jewish optimists. At least not anymore. They all stayed in Europe and we know how that turned out. One of the families who stayed too long was the Camondo family whose own history should have been reminder enough that when it’s time to go, it’s time to go.  If you’ve been to the Musee des Arts Decoratifs, a wing of the Louvre (and if you haven’t, you must go, as soon as it reopens), you know that you can buy a dual ticket that includes entry to the Musee Nissim de Camondo. This museum, like the Jacquemart-Andre and the Cognacq-Jay in the Marais, is the former home of the family whose collection is housed there (not exactly for the C-J, but we’ll talk about that another time).  But unlike those other wealthy benefactors, society painter Nellie Jacquemart and her banker husband Edouard Andre and Theodore Cognacq and his wife Mary-Louise Jay, founders of the Samaritaine department store, who were French, the Camondos were decidedly not.

Sephardic Jews, the family was expelled from Spain in 1492 with all non-Catholics who refused to convert. After prospering in Venice, their next port of call, the Camondos were sent packing again when Austria invaded Venice. This time they settled in Istanbul where, despite sumptuary laws aimed at non-Muslims, they prospered. Indeed, one branch of the family became the bankers to the Ottoman Empire. That family’s final move, in the 1860s, was to Paris where the owner of this museum, Moise de Camondo, following in his father’s footsteps, became a very successful banker. Born to wealth, he was an excellent horseman, yachtsman, motor car enthusiast, gourmet, all around bon vivant. (Figure 2) Most importantly for this review, he was an art collector. When his beloved son Nissim, a fighter pilot, died in aerial combat in the great war, Moise retired from banking, retreated from society and devoted his life to collecting the objects which fill this museum dedicated to his son’s memory. (Figure 3) Moise de Camondo died in 1935. His daughter Beatrice thought she was  safe in Paris after the Nazi occupation. (Figure 4) After all, she had converted to Catholicism, she was rich, she had rich friends, her brother had died in the war, her father had bequeathed his art collection and mansion to France. Her Jewish ex-husband pleaded with her to flee. She disregarded his advice. In 1943, Béatrice, her ex-husband and their two children were deported to Auschwitz, where they all perished. Haven’t I heard this story, read this book, seen this film? Oh right, Garden of the Finzi-Continis, different family, different country, same ending. (Figure 5) 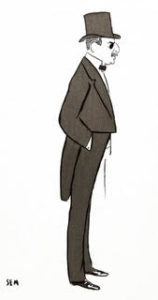 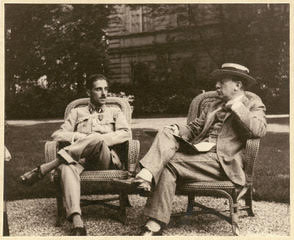 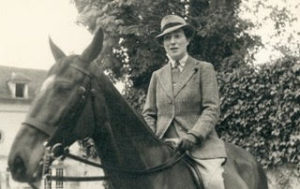 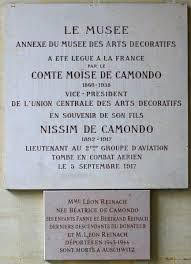 What about the art collection, I hear you asking. Just give me a second, I’ll get there. I once read a paper written by an art historian at UCLA about the art buying decisions made by the American Robber Barons of the early 20th century. According to the article, when these men were making risky business decisions, they were buying ‘safe’ paintings, those with impeccable provenances. When they were making cautious business decisions, they took risks in the art they bought. How might that inform what Moise de Camondo bought? Moise collected French furniture and decorative arts from the second half of the 18th century, during the reigns of Louis XV and Louis XVI. The pieces he collected have perfect provenances, some with direct links to the royal households. His art advisors had impeccable pedigrees, one was a curator at the Louvre, another a curator at the Musée des Arts Décoratifs. Camondo bid at auctions and bought from the finest Parisian antique dealers, among them Seligmann and Wildenstein. Following leads and clues, with patience and determination, he reunited furniture pairs that had been separated, sometimes exchanging pieces with other collectors. Moise de Camondo was shrewd and deliberate. The furniture he sought out and bought was not cutting edge but its historical connections assured its importance. Availability, authenticity and presumably taste. But possibly, do you think, a desire to fit in, to be more French than the Frenchmen with whom he rode, hunted, sailed, dined. By preserving his adopted country’s patrimony, he established himself as a true Frenchman. I hope that Moise de Camondo truly loved the 18th century French furniture and decorative arts he collected and bequeathed to his adopted country because the way that country treated his descendants was unconscionable.

The Musee Nissim de Camondo is a house on Parc Monceau that Moise de Camondo commissioned the architect Rene Sergent to design. Begun in 1911 and completed 3 years later, the architect’s brief was the following: echo the Petit Trianon at Versailles on the exterior; (Figure 6 & 7) make interior dimensions fit exactly with the furniture and wall paneling, window treatments, floor coverings, etc. of the collection and introduce the latest modern conveniences in the kitchens and bathrooms (Figures 8 & 9). 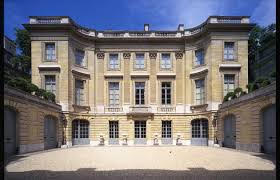 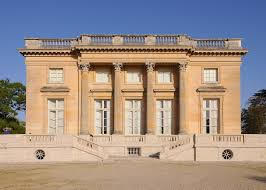 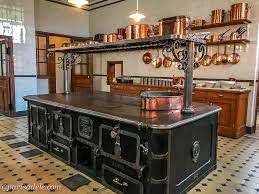 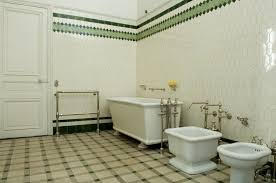 Furniture and decorative arts can be displayed in a variety of ways, as I am sure you know. While much can be learned (I am sure) from walking along miles of grandfather clocks or wing back chairs, I prefer my furniture displays in some kind of context. You have stood (as I have) maybe even lingered at the rope barrier of period rooms in museums. But there are friendlier ways to go about displaying furniture. At the Jacquemart-Andre Museum, for example, some rooms give you a sense of how its owners lived while other rooms are devoted to displaying their art and objects collection. You do get a sense that people lived there.

The Musee Nissim de Camondo is different, it is a period house, each room on view is an exquisite work of art, a perfect combination of furniture, fabrics and accessories. (Figures 10 11 & 12). I often have the pleasure of traveling with my interior designer daughter whose knowledge of 18th century French and English furniture is broad and deep. For those of you who don’t normally travel with an 18th century furniture specialist, make the free audio guide your companion. You will learn a lot, retain a bit, (all the more reason to return) ! Enjoying this beautiful museum which is never crowded then taking a walk in the Parc Monceau will be just the thing once this sheltering-in-place stuff is over and we can visit museums again, even if we have to wear masks, have our temperatures taken before we are permitted entry, then stay away from each other once we are inside - small price to pay for art ! 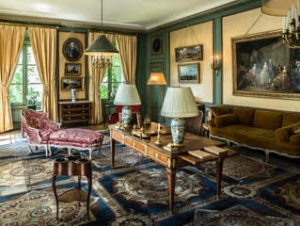 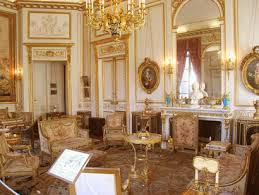 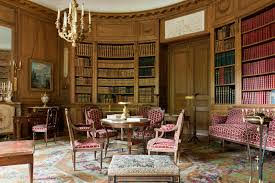 Loved this article. This is on the top of my list the next chance I have to be in Paris. I have been to the other 2 museums mentioned in the article and love all of the small museums in Paris, but this one has escaped me. Thank you for this wonderful article. D. Remenick

Hi Beverly, When living in Paris, I made a point of dragging any guest willing to accompany me, to this house. It's such a beautiful and sad place. Moise, living here all alone, surrounded by his beautiful objects, deserted by his wife. In sum, it's tragic. I have wondered how well he was accepted by Paris society, also whether he traveled in the same circles as the Ephrussi's. To end the excursion on an upbeat note, I would always end by taking my guests to the park for a picnic lunch. Unlike the Luxembourg gardens, people are welcome to venture onto the lawns in Parc Monceau.