Marie Antoinette at the Conciergerie 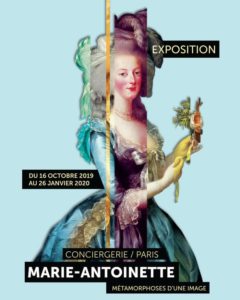 I have always been less, much less, interested in the REAL anyone. George Washington, for example, the mythologizing images of him by great and not so great artists are fascinating, the portraits, not so much. The same with the mythologized Napoleon. He is much more dashing (to me) than is his real self. Of course, both of these men were contemporaries of Marie Antoinette. The former owed his military success to her husband’s financial and military aid. The latter owed his military success to her and her husband’s beheading, which can be linked to that financial aid.

The exhibition at the Conciergerie does begin with facts. The venue alone is part of Marie Antoinette’s story since she spent her last days in a prison cell here. Initially built as a palace in 1200, it became a prison when Charles V moved to the Louvre in 1400. During the French Revolution, it served a dual function, the RevolutionaryTribunal met here and conveniently enough, political criminals were imprisoned here.

From 1792 -1794, the place was hopping, some 2700 people were sentenced to death, among them the subject of this exhibition, and following her demise, Revolutionaries who fell out of favor with each other, were brought here before they were guillotined, among them Danton and finally Robespierre himself. Then as now, the wealthier the prisoner, think Bernie Madoff and I’m guessing Aunt Becky (from Full House) when her time comes, the more comfortable the accommodations.

During her life, Marie Antoinette was celebrated and pilloried. The court portraitist, Elisabeth Vigee-Lebrun depicts her as a beautiful young queen and eventually (when Louis XVI figured out what to do and how to do it) a beautiful young mother. The images of Marie Antoinette, as a doting and devoted young mother were part of a movement in 18th century French art, literature and philosophy, celebrating motherhood. At a time when it was (incorrectly as it turned out) feared that the population of France was declining, Diderot encouraged men of ‘feeling and sensibility’ to “give your wife children, give her as many as you can, and give them only to her.”

Marie Antoinette and her Children, by Vigee LeBrun, 1787 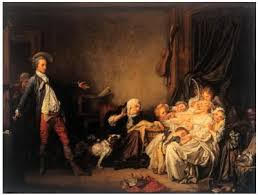 Painters from Fragonard to Boucher to Greuze painted images of Happy Mothers, and Vigee-Lebrun painted her royal subject this way, too. And apparently there was some truth in it as it turns out Marie Antoinette did want to breast feed her children. 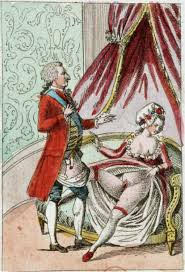 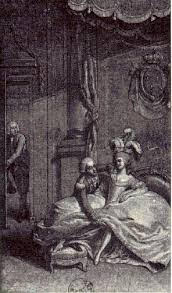 Marie Antoinette and brother in law, Count d’Artois as Louis XVI looks on

Salacious images of the queen abounded as well, especially as the country headed toward Revolution. One historian has suggested that the kinds of salacious attacks which during earlier reigns had been reserved for the King’s mistresses, were all heaped upon this queen because her husband had no mistresses. It was rumored that Marie Antoinette had sexual relations with among others, two ladies in waiting, the king’s brother (her brother in law), Marquis de Lafayette (of American Revolution fame),her Swedish lover (which was probably true) an unidentified priest, and all sorts of barnyard animals. Not only did the rumors heap disdain upon the queen, by questioning her fidelity to the king, the paternity of her children and their right to the French throne were called into question. This effort speaks loudly, in my opinion, in support of matrilineal descent. Tracing the heritage of a baby is easier through the mother since it is pretty obvious who the mother is, whereas a child’s paternity has only been more or less reliably identified in modern times. Matrilineal descent is a basic premise of Judaism - a person is Jewish if his/her mother was Jewish, we all know that. And it makes sense, what with all the raping (and pillaging) that went on back in the day. And as we are all aware, ancient Egyptian pharaohs traced their lineage to the throne through the female line, from the beginning to the end of Pharaonic history, and a very long history it was. Just saying.

Depictions of Marie Antoinette have been since her lifetime, fluid and changeable, telling us more about the people interpreting her than about the queen herself. Different times, different countries, different media all show how her image is a function of the people doing the image making rather than the woman whose image was being made. At one moment she is the traitorous foreigner, at another the female martyr; to some she is a heroine, to others she caused the fall of the French monarchy. Sometimes she is depicted as an exemplary mother, sometimes as a style icon. Clips of historical films purporting to be about the life and times of Marie Antoinette show the multiple lenses through which she has been viewed and depicted. I remember binge watching film depictions of Little Women one year and Jane Eyre more recently. The various interpretations were a function of beliefs, morals, opinions, attitudes of the times the films were made and were in no way more ‘accurate’ interpretations of the books. And so it is with depictions and portrayals of Marie Antoinette.

One curator noted in a video discussion that Marie Antoinette tried to have a personal life, but there was no such thing as a personal life for an 18th century queen. The monarchy was a public spectacle and the royals were always on view. A connection is suggested in the exhibition between Marie Antoinette and Princess Diana, both unhappy young woman expected to play a role neither of them was especially happy or comfortable playing and both of whom died young. (Diana at 36 Marie Antoinette was 37). There are some similarities between Marie Antoinette and Princess Diana, as well as the young women who married Diana’s sons, all of whom express/ed a longing for some privacy. But Marie Antionette was not a reluctant monarch. She was born an archduchess and died a queen. Indeed she believed in the divine right of kings right to the end. 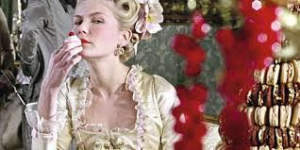 Marie Antoinette as a confused young woman trying to make sense of a different country, an aloof husband and a hostile milieu is all captured in the film by Sophia Coppola which also luxuriates in the pastel perfection of her dresses, her rooms, her macarons. Coppola’s interpretation, based upon the biography of Antonia Frazier,depicts a young woman for our time with a sound track of our time. If you don’t know the film, see it. I fell in love with the above mentioned macarons as well as all those lovely chickens and of course, the sound track. The dress that Kirsten Dunst (as Marie Antoinette) wore to travel to Versailles from Vienna is in the exhibition, as is a dress referencing Marie Antoinette by John Galliano for Christian Dior. There are lots of other items in this exhibition that fall into the category of camp and kitsch, from a Barbie doll Marie Antoinette to a Pez candy-like dispenser with a pop off head. See the exhibition, delve deeply into what interests you, examine what amuses you and peruse what seems bizarre to you, but whatever you do, definitely go ! 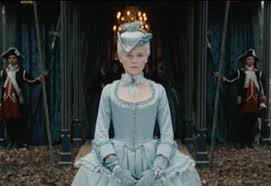 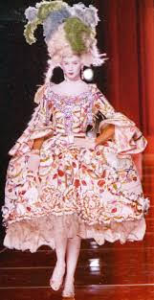 Why is this review not signed? It's so much fun to read. Give the author credit.

I credited Beverly in tomorrow's newsletter-thanks for reminding me-just a slip, not to be repeated

Beverly’s humor comes shining through in this magnificent exhibit of which I was privileged to see ! Why did I miss the pez dispenser ? Fantastic review as always by Beverly Held !

After reading this I am running to go see this expo! Thank you