My daughter always tells me I have Gainsborough hair, and there is some (much) truth to that. My hair never sits flat, it kind of hovers, I like to think of it as a halo.
But I am not unhappy to be told that it is m 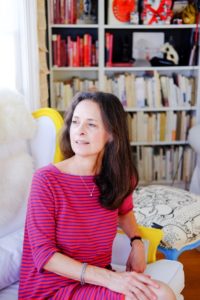 ore like a Gainsborough. So, I was looking forward to seeing the exhibition at the Musee du Luxembourg entitled ‘The Golden Age of English Painting.’ For me, any ‘Golden Age’ of British Painting should start with William Hogarth, one incredible artist. This one doesn’t, it starts 30 years later with Sir Joshua Reynolds. The paintings at the Luxembourg are all from the British Tate which has a solid collection of English paintings from the 18th and 19th century. Once your appetite has been whetted by this exhibition, you will have an excuse to go to the National Gallery London or for a real treat to San Marino, California and the Huntington Library and Museum. According to themselves, the Huntington houses the most important collection of British grand manner portraiture outside the United Kingdom as well as excellent examples of 19-century British landscape painting.
The British Tate does have a Reynolds’ painting you will have seen, if you have seen any Reynolds at all, that is. Reynolds, I should mention was the first president of the Royal Academy of Art which was founded during the reign of George III, the English King that Americans love to hate. I should also note for the record that the second president of the Royal Academy was none other that the American born Quaker Benjamin West, but that is a tale for another time. The painting by Reynolds to which I am referring is ‘Master Crewe’ as Henry VIII. The portrait is of a 3 year old boy dressed up as a deceased king of England. 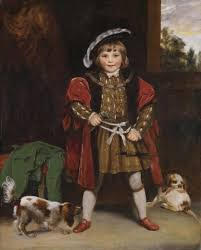 I was told in an art history class once that the little dog sniffing at young Master Crewe’s leg is meant to suggest that the little boy has just peed (or worse) his britches. Maybe that is so. We are also supposed to infer that this portrait of Master Crewe in dress up, as well as the portrait of his sister, who died before her portrait was completed, show that Reynolds’ understood Enlightenment ideas of childhood. Before the Enlightenment, children were dressed and depicted as miniature adults. Until about the age of 7, they were often ignored and with infant and child mortality being what it was, I guess that might have made sense. At age 7, the wealthy sent their boys to boarding school and girls began their training at home as women and wives. The Enlightenment contended that childhood was a distinct phase of life. And so children were permitted to act as someone somewhere between baby and adult. 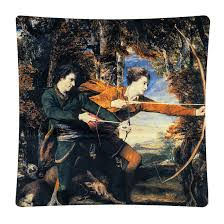 Another painting by Reynolds in the show, well worth a prolonged investigation is ‘The Archers: Double Portrait of Colonel John Dyke Acland and Thomas Townshend, Viscount Sydney,’ painted in 1769, shortly after Reynolds became first president of the Royal Academy of Art. It is a little weird at first to look at these two not terribly attractive young men each with bow and arrow fully distended, indifferent to the carcasses cluttering the ground at their feet. The painting references the two men’s aristocratic roots since only aristocrats were permitted to hunt. Like ‘Master Crewe,’ these two young men are in fancy dress, here referencing a chivalric past. This double portrait shows Reynolds’ abiding quest to raise portraiture to the level of history painting. For me, the repetition of circles, with the fully extended bows held, especially by the young man on the right who, seems ready to spring forward with the arrow and centered as he is in the circle seems almost a Vitruvius man of action.
I know and if you go to this exhibition, you will learn, that Sir Joshua Reynolds, about whom we have been speaking and Thomas Gainsborough, who I mentioned in the first sentence, a contemporary of Reynolds, were rivals. They were the best portrait painters of their generation, so of course they were rivals. Anyhow you will read that if he had his druthers, Reynolds would have stuck with history paintings and Gainsborough would have painted landscapes. And so you will wander around the Luxembourg Museum trying to figure out who painted what and sometimes you will get it right. 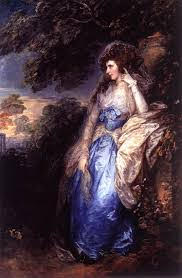 A portrait of ‘Lady Bate Dudley’ by Gainsborough, dated 1787 will help you understand both my daughter’s observation and Gainsborough’s predilections. The woman in question is seen in profile, around her everything seems to shimmer - her gorgeous white and blue outfit, her hair, the leaves on the branches of the trees both in the foreground and background, the clouds in the sky. Nothing is given more emphasis, except perhaps the sitter’s nose (see below) but everything offers a shimmering sense of motion and airiness and lightness and beauty.

Sir Joshua Reynolds
My favorite comparison of the two artists is their portraits of the divine actor, Sarah Siddons. Reynolds depicts her as Melponene, the muse of Tragedy seated on a throne between allegorical figures of Pity and Terror. When she came for her first sitting, Reynolds is reported to have said “…Ascend upon your undisputed throne, and graciously bestow upon me some great idea of the Tragic Muse…” 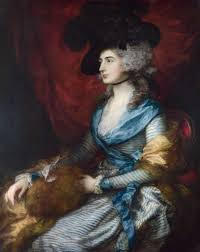 Gainsborough shows Mrs Siddons seated as well, this time in profile, but as a fashionably dressed woman. He apparently lamented the size and shape of her nose and then proceeded to construct a painting around the size and shape of her nose, although he is said to have uttered, as he struggled with it, “…Confound the nose, there’s no end to it…”. (Reynolds’ portrait is at the Huntington, Gainsborough’s is at the National Gallery) 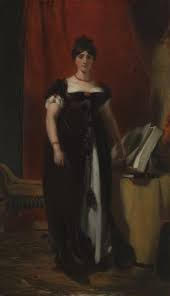 The portrait of Sarah Siddons in this exhibition is by Sir Thomas Lawrence, painted twenty years after those by Reynolds and Gainsborough. Mrs. Siddons has become portly. Her tiny and still beautiful head sits atop a voluminous column of a body. At her side is a table on which are scripts, one is Shakespeare’s Macbeth and alludes to her current occupation, giving recitals of plays in which she had acted. I was happy to see this painting by Lawrence, but I don’t believe it is captivating enough for you to want to know more about Mrs. Siddons, which was the effect that both Reynolds’ and Gainsborough’s portrait of her had on me back in the day. In the movie, All About Eve, a statuette based on Reynolds’ portrait of Sarah Siddons is awarded to the for the best theatrical performance. To see the award being awarded, click here:(thank you Terrance for the reference) 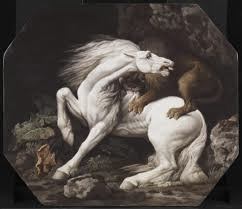 There are some good 19th century paintings in this exhibition. My favorite is by George Stubbs, painted in 1769 entitled ‘Horse Attacked by a Lion’. It is one of over 17 painted by the artist of the same encounter - horse and lion. This is the sole example of enamel painted on copper and octagonal shape. The sense of terror and fury is boldly depicted. The white horse’s head turns 180 degrees as it brays in fear and pain. The brown lion seems to have just leapt upon the horse’s back, it bites into white flank,  white teeth and pinked gums barred, claws digging deep into horse flesh.
This exhibition gives you a taste of art 18th and 19th century English. I hope you will want to continue to explore it and I certainly encourage you to check out paintings by William Hogarth, too.

Another interesting, informative and charmingly wry review! You include much in-depth infomation along with amusing anecdotes and perceptive analyses of the paintings. I enjoy your reviews so much. Write more, please.

Beverly Held's reviews are my go-to Art History class and I greatly look forward to her unique perspectives.

Terrance I was most privileged to attend this most inspiring tour of English Painters exhibited at Musee De Luxembourg Oct 2019 with you and Beverly during my Paris stay this past October. And what a treat that was !! I now have more informed perspective of the paintings, the historical background of the period and relationships, and their subjects. You and Beverly are highly personable , accessible and informed ! Thank you for an exceptional experience ! Franny Hurwitz Larkspur , Ca