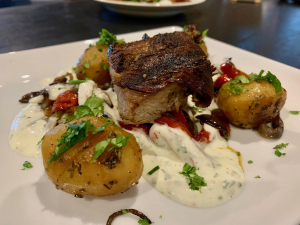 Today I’m not sharing a recipe as much as the methodology used to serve a leg of lamb to our “bubble” (ie: neighbors) this past Sunday.  I don’t have a recipe per se because when I cook for family and friends, I don’t follow recipes; I simply “cook”.  It gives me freedom to try out new ideas and to prepare simple, family-style dishes, which I absolutely love!

We needed to pick up the lamb on Saturday morning at the farm.  Eric, Skippy and I enjoyed a picturesque and sunny drive through the hilly countryside surrounding Monflanquin.  The fields are now dotted in yellow thanks to the flowering “colza” (rapeseed) crops.  It’s such a simple pleasure to see.  We arrived at La Ferme Biologique de Catès, an organic farm owned by Didier Simard, who along with his partner Eve, take great care in raising and managing about 300 sheep and lamb.   With all that care and attention, the quality is (needless to say) unmistakably high.

I wanted to do justice to the work of Didier and Eve and thought about the many ways to prepare a “gigot d’agneau”.  In the end, I decided to “confit” it first to get a super tender texture and then I would give it a dry rub before finishing it off on the barbeque.  It could then hold well over gently warm heat before serving - this is a perfect way to serve family and friends when you’d rather be visiting them instead of laboring in the kitchen.

Cooking a leg of lamb this way is time consuming only in the amount of planning time you need to allot, but it is very simple to do.  The 1st confit cooking step should be started the day before you serve it, but you could equally do this several days before.  For anyone not familiar, to “confit” something is to cook it at low temperature in an oil or fat, over a relatively long period of time.  Here in the southwest of France, the fat of choice of course is duck from the same duck that gives us foie gras, magret and “duck confit”.  (As many of you know by now this same duck fat makes fantastic fries!).  The 2nd cooking step, the barbeque, adds more depth of spicy/smoky flavor, along with some crispy texture.  Absolutely délicieux!

Recipe: Spiced 7-Hour Lamb Confit (on your website)
(I apologize in advance that I don’t have exact quantities as I was cooking by “feel” rather than precision.  Adventurous cooks should be able to manage.  Don’t hesitate to reach out with any questions.)

Day before: Prep and Confit the Lamb 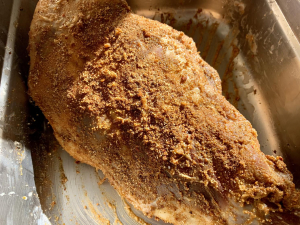 I wonder how many of you will try this.  If you do, please let me know how it turns out for you.  Reach me at:  diane.anthonissen@gmail.com or info@ladausse.com