The Christian Louboutin exhibition at the Palais de la Porte Dorée is fabulous, fun, fantastic. Women in classic ‘Louboutins’ teeter around on heels almost 4” high. M Louboutin wears high top tennis shoes.. Louboutin’s red soles are copyrighted. Louis XIV wore red heeled shoes in the 17th century. Young women, presumably suffering from status anxiety have been known to paint the soles of their presumably much less expensive high heels, red. Nordstrom, the exhibition’s main sponsor, which started out as a shoe store, has a great return policy. So keep that in mind if, suffering from buyers remorse after you attend the grand event for which you buy your Louboutins, (Pigalle Follies $695/pair), you want to return them. But I digress. The exhibition is beautiful and smart; interesting and intelligent. And yet and yet ….. This is an exhibition about high heeled shoes, very high heeled shoes. Shoes which keep their wearers from running or even striding with determination, let alone self determination. 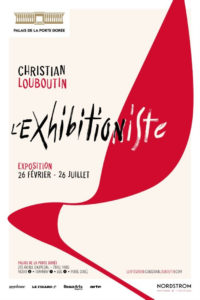 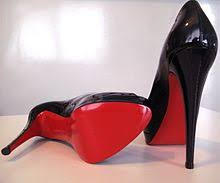 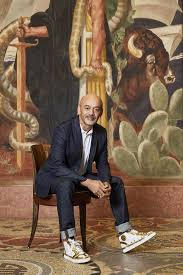 Before discussing this fascinating and extraordinarily well done exhibition, I want to mention that the Musee des Arts Decoratifs has an exhibition, (closing on March 23) on the history of shoes.  Which was excellent preparation for the Louboutin show. Here are some fun facts: distinguishing a right foot from a left foot shoe is a very recent phenomenon, as are shoes for specific activities - ballet, basket ball, boot camp. Chinese women’s feet were bound from the 11th century to 1950. Western women have been stuffing their feet into shoes that are too small and too narrow for a very long time. Small feet have been considered beautiful for a very long time. Long legs, linked to physical health and fertility, have been admired for even longer. But we are talking about high heel shoes here. Do you remember when the Cannes Film Festival barred women from attending screenings in flat shoes ? That was in 2015. Japanese women began objecting to wearing high heels to work last year. So it seems like a tricky moment for an exhibition devoted to a man whose fame and fortune is a result of women buying really expensive high heel shoes. Stranded as we are in this #MeToo moment, should we be asking why women are buying shoes in which they cannot walk, why they are buying into this definition of beauty? Never mind, let’s move on and have a good time, okay ?

The exhibition was curated by the Director of the Musee des Arts Decoratifs (MAD). But the exhibition is not at MAD, it is at the Palais de la Porte Dorée, an Art Deco structure built for the 1931 International Colonial Exhibition. It houses an aquarium in the basement and at various times has housed ethnological collections and the country’s African and Oceanic art and artifacts collections. In 2017, the Palais’ directors began looking for patrons to help restore the building. Louboutin offered to help, explaining that he had grown up in the neighborhood and had been a frequent visitor. The directors decided it was a good fit (pun intended) to celebrate the building with an exhibition on the work of a man who has been inspired by it.

Louboutin came up with the title of the show, Exhibition(iste). He explained that for him, this exhibit is an act of exhibitionism, since by exhibiting his work, his inspirations, his creative process, he is exposing himself. That sounds uncomfortable, maybe not as uncomfortable as walking around in 4” heels, but it’s a start ! When you go to this exhibition, and you should definitely go, you will see what a kind and generous man M Louboutin is. He took the opportunity of this exhibition about his own work to celebrate the work of others - the artists and craftswomen and men with whom he has collaborated and whose work inspires him. He is happy to tell us that he finds inspiration everywhere and he urges us to do the same - to seek out the new (to us) and different (for us). Bhutan and Bhutanese craftsmen inspire him, as do the sea creatures swimming in the aquarium in the basement of the Palais de la Porte Doree.

The exhibition is divided into ten sections, let me share a few with you. The first room, the Antechamber, is very funny because in it is a replica of the sign that greeted visitors to the African and Oceanic collections at the Palais when Louboutin first started going there, in the 1970s, at the age of 8. The sign is a high heeled shoe with an ‘X’ on it. You have seen an illustration just like this one, dozens if not hundred of times, on airplanes, in the safety pamphlet tucked into the seat back in front of you. High heeled shoes must be taken off, even if they are your Louboutins, during an emergency landing because they might puncture the inflated slide on which you will be escaping. High heels were forbidden at the Palais because they could ruin the parquet floor. This ‘interdit’ (forbidden) shoe became the inspiration for Louboutin’s iconic Pigalle shoe, (retail price $695) see above. 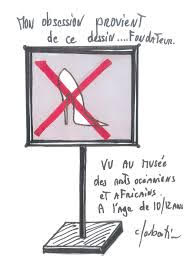 Another room is called the Nudes. According to the press kit, “Started in 2013, the Nudes series is seen today as a pioneering act in the world of fashion. By imagining a shoe that is truly flesh-colored for all skin types, the shoe becomes a seamless extension of the leg.” Louboutin offered a little more background in a 2016 blog post, “I’ve always done a Nude shoe but only using the color beige.”  When a team member finally blurted out, ‘beige is not the color of my skin’ Louboutin’s “Nude” went from color to concept and his flesh heels now range from “porcelain” to “deep chocolate”. What I can’t understand is what took Louboutin so long. He describes his background as having been very ‘French, French’. But he wondered why he was darker than his very blond sisters and parents. If you look at photographs of Louboutin as a child, you can see that his skin is dark. He daydreamed about being adopted which, he writes, made him very happy. Yet for a very long time, his flesh toned high heeled shoes were the same color as the flesh tone in my Crayola box of crayons. One of his sisters finally told him, (2014) that he was the fruit of his mother’s affair with an Egyptian man. Yet as inclusive as he is, and as aware as he was of his own difference, why didn’t he expand his definition of ‘flesh-colored’ sooner? To celebrate multi-colored diversity in this room, Louboutin commissioned 9 leather-clad sculptures in the 9 colors of his Nudes collection. Louboutin’s inspiration for the sculptures is a painting in his own collection, a 16th century portrait of Jean Beauvau attributed to François Quesnel. On his legs, under very short breeches, Beauvau wears stockings (or tights) the same color as his shoes. 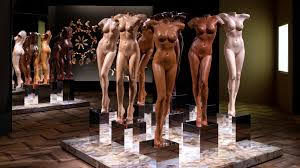 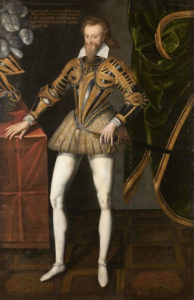 Another room called In The Workshop could as easily have been called Tradition and Innovation. According to the press kit, “a shoe is the result of nearly a hundred steps that all contribute to its design, and just as many for its production.” Louboutin’s appreciation for and reliance upon craftsmanship and his appreciation for and reliance on technology is equally celebrated here. Short videos that identify and describe the sequence of steps required to design and then produce a shoe are both lively and informative. You get a sense that the price of these shoes is as much a function of how much it costs to make them as it is what the market will bear.

There is a Hall of Fame, along which you will see photos of lots of celebrities - from actresses and models to singers and sports heroes - all wearing their Louboutins, culminating with Aretha Franklin who was buried with a pair of hers. You will have to discover the Bhutanese Theatre on your own. Do stay long enough to see an installation with two original holograms, one of stripper and dancer Dita Von Teese and another of football freestyler Iya Traoré.

I will tell you about two more rooms, one is called Suggestions or Projections. The room looks, at first glance, like a stuffy, overwrought living room your conservative English granny (if you had one) might have lived in the 1960s or ’70s. There’s a lot of chintz and the flowery wall paper seems to go on forever, because it does. Initially you don’t think much about the pattern, but if you look closely you will see that the floral patterns are actually combinations of transformed bodies based on the photographs taken by the photographer Pierre Molinier, whose thing was to transform himself into a hyper-sexualized woman. As Louboutin notes, sometimes things just aren’t what they appear to be. With this room, what you think is just too much is really just too kinky ! 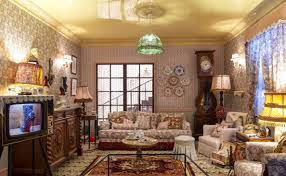 Here is the last room I will tell you about. It is called FETISH and is a display of shoes and photographs from a 2007 collaboration between Christian Louboutin and the filmmaker/photographer/actor, David Lynch. Lynch asked Louboutin to create footwear that had nothing to do with comfort or practicality. With the resulting shoes, Lynch created 21 erotic photographs. Not all of the shoes or photographs are here, but enough to give you an idea of what’s going. Some of the photos show standing women, nude, from the waist down, from behind, in a ‘take me now, please take me now (so I can take off these shoes) pose” Other photos show women lying gracefully on a bed, grateful that no matter what happens to them now, they won’t have to be standing up when it does. Some of these shoes are not even meant for wearing, one pair, with heels over 10” high might remind you of a ballerina on pointe, but they are certainly not meant for dancing, or even walking. Another pair, called the Siamese are fused together, your guess is as good as mine. The exaggerated heels draws attention to the exaggerated arch of the foot. That’s the sexy part, right there. So, let’s forget about these shoes as shoes. They are not. They are sculptures. They are works of art. 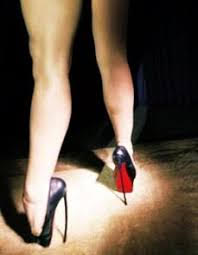 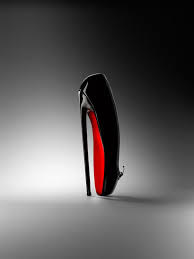 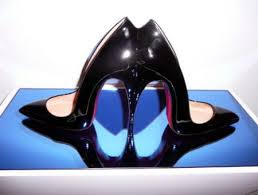 You absolutely must promise me that you will see the show. Even if you don’t like high heel shoes, (I hate them, or maybe I just envy anyone who can wear them) you will really appreciate all the thought and creativity that has gone into this exhibition.To get just a taste of the show and the charming M Louboutin, click onto this link, from the New York Times. You’ll be glad you did, I guarantee it !

Great enticing review ! I plan not to miss this !

If I were in Paris now, I would run - no, make that teeter - to the exhibit. Love your writing and descriptions. For now I'll just have to settle for my red marker and pretend to be sassy and sexy.