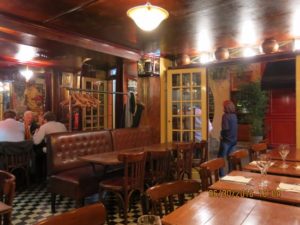 Another small gem tucked in between the rue du Four and la rue Guisarde on la rue Princesse.

Either Juju or David will greet you at the door with a charming smile and a few words of English but the food is all-French, simple, wonderful and portions, even by American standards, generous. On my last visit I had a buttery foie de veau (calves liver sauté) that eradicated all memory of that charred, inedible product that my mother served on Wednesday nights. 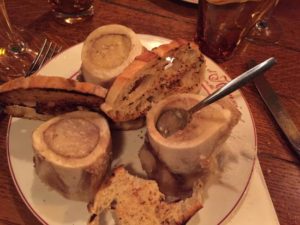 A well-thought out list of reasonably priced wines adds to the pleasure of a delightful meal that doesn’t require an emergency trip to the nearest ATM.

With many bistros closed on Mondays I had a chance to eat here twice in a week and I’m delighted that it is everything I said before and more- a formule lunch of entrée, plat ou plat, dessert at 17 euros is a great value.

On day one accompanied by my octogenarian film and golden age of television trivia buddy, Bobby G. we devoured onglet and perfectly grilled lamb chops. The following week I was treated by Virginia of San Francisco and neither of us could resist the buttery, falling off the bone lamb, that had been simmering on a low flame for seven hours. The pot lyonaisse (46cl) of a cote Lyonaisse for eleven euros was excellent.

What else could one ask for?

Be sure to tell them that Terrance sent you.

I would highly recommend the small intimate family-owned restaurant, le Bistrot d'Henri 16, rue Princesse in the 6eme. My blanquette deveau was perfection and I will truthfully say was the most delicious dish I have ever had in all of my many visits to Paris and all of France! This friendly, welcoming bistro prepares their meals with pride and has very reasonable prices. Heaven.