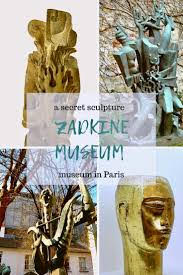 The Zadkine Museum is our topic today. Do you know it ? Again, the answer is, maybe not. On rue d’Assas? Not as chichi as rue de Furstemberg (Musée Delacroix), but still in the 6ème. Down the street from one of my favorite chocolatiers, Rochoux, Did I ever tell you that I am as addicted to chocolates as I am to museums ? Minimum 72% cacao, usually single origin, often Madagascar or Venezuela. Perhaps I will offer you a curated list of bean to bar chocolatiers in Paris sometime. Well, anyhow, before Christian Constant moved his chocolate shop to rue des Ecoles, rue d’Assas was a trifecta - Zadkine, Constant & Rochoux. As it turns out it is still a trifecta for me because my friend Peter happens to have an apartment on rue d’Assas. Where was I?

I asked if you had ever been to the Zadkine Museum, maybe I should have asked if you have ever heard of Ossip Zadkine, the sculptor who lived there with his wife. Burning question: should I get all feminist right away or wait until the end? Heck, I am going to do it now. We have discussed the Bourdelle Museum and the Giacometti Institute, for both of which the driving force of their creation was the artists’ wives. That happens to be the case with this museum, too. But …. Bourdelle’s wife came from Greece to study with Bourdelle. From student to wife, she became his muse and model. She helped her husband with his students, probably keeping an eye on the more attractive female students, not wanting what happened to her husband’s first wife to happen to her.

Okay, so how is Zadkine’s wife, Valentine Prax different? (Figure 2) She was as serious an artist as her husband was. So why, I hear you asking is this the Zadkine Museum and not the Zadkine-Prax or even the Prax-Zadkine Museum ? Good question. Herewith some details. Valentine Prax was born, raised and began studying art in French Algeria. In 1919, at the age 22, she sold some jewelry her grandmother had given her and moved to Paris. Her upstairs neighbor was none other than Ossip Zadkine, 8 years her senior. He introduced her to the avant garde Montparnasse art scene, of which he was a part. A year later, they married.That same year, Valentine Prax had her first solo exhibition in Paris, followed by exhibitions in London, Chicago, Philadelphia and Brussels. In Paris, she participated in the Salon d'Automne in 1933 and 1936. In 1937, she was commissioned to create a large ceiling design for the Musée d’Art Moderne as part of the Paris International Exhibition. (Figure 3, Figure 4) 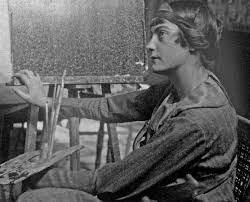 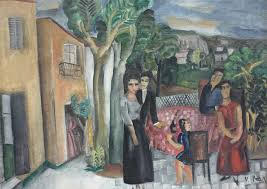 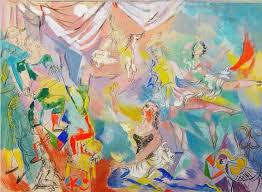 Zadkine was successful, too (more about that later) and so they purchased the studio house on rue d’Assas which is now the Musee Zadkine. And they  purchased a dilapidated country house in SW France, Les Arques, where there is also a Zadkine Museum. Their future looked bright. Then the Nazis invaded France. Zadkine’s father was Jewish and although he had converted to Catholicism to marry Zadkine’s mother and raised his son Catholic, Zadkine knew that particular nuance would be lost on the Nazis and so, in 1941 he fled to the United States. In that decision, he was certainly more aware of what was going on than Beatrice de Camondo, who, convinced that she was too rich and too important to be sent to a concentration camp, stayed in Paris until she was deported.

Valentine did not flee France with Ossip. She stayed to protect their art and their property. The Nazis did take over their studio house on rue d’Assas. But with the help of some brave neighbors, Valentine saved her husband's bronze sculptures by hiding them in the basements of those neighbors She destroyed his paintings 'rather than see them scattered by the Nazi regime’. Poor and hungry, alone and scared, Prax spent the Nazi occupation at their country home. Painting was her solace, especially when she received a letter from Ossip saying that he was not returning. Accounts differ on when she received Ossip’s missive, 1942 or 1944. Whatever the actual date was, she confessed later that, 'this period of the war was the best for my artistic production.”

In 1945, she received another telegram from her husband, this one read: 'I'm ill, miserable and penniless. Are you happy for me to return?” Really ? But she agreed and in 1945, they were both completely broke. Eventually she began exhibiting again and her work is in the permanent collection of the Musée d’Art Moderne in Paris as well as in museums in Brussels, Algiers, Amsterdam and Geneva. (Figure 5) 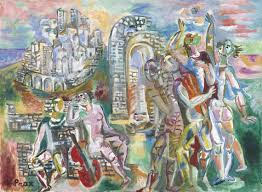 I came across a little book entitled, Couples of Artists (https://art.moderne.utl13.fr/2019/03/couples-dartistes/2/), brief essays on married artists, like Max Ernst and Leonora Carrington, Robert and Sonia Delauney, Ossip Zadkine and Valentine Prax. We read that the first time Valentine showed Ossip her work, he told her she should try writing instead. And yet, she married him! Only after they were married, this essay continues, did she realize ‘that her husband wanted to make her a housekeeper’!! So she painted when he was in his workshop. And although they both dreamed of a museum, somehow this one only celebrates his work, not hers. And she goes down in history as the driving force behind the museum’s creation rather than as the artist whose work is remembered by it.

Before we talk about the museum itself, which is really lovely, let’s fill in Zadkine’s biography. (Figure 6) Born in Russia, in 1890. Jewish father who taught Latin and Greek. At 15, his parents sent him to England to study art. Five years later, he was off to Paris to continue studying art. The Academy of Beaux Arts was not for him. He sought his own path, initially drawn to Cubism. At first, he carved directly into the wood or stone but eventually he began to produce models in plaster or clay which were then cast in bronze. The 1930s were a great time for both Zadkine and Prax. (Figure 7) They hung out at Le Select and Henry Miller hung out with them. Even his years in New York were creative ones, he had a studio in Greenwich Village, he taught at the Arts Student League and he participated in exhibitions with Leger, Chagall and Lipchitz. 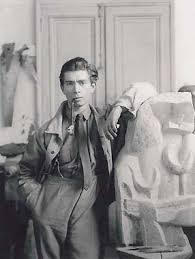 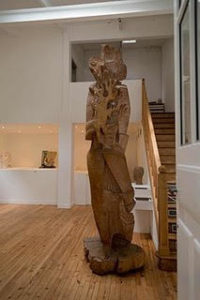 He returned to Paris in 1945, perhaps because the woman with whom he was living in New York, moved on. At any rate, Valentine took him back, And commissions began to come in again. In 1950 he was awarded the grand prix for sculpture at the Venice Biennale. He continued to teach, both in his own studio and at Antoine Bourdelle’s Académie de la Grande Chaumière. He had exhibitions in Europe and Japan. He wrote a memoir, The Mallet and the Chisel, Memories of my Life’. When he died in 1967, he was considered by many to be one of the most significant sculptors of his time. (Figure 8, Figure 9)

The Zadkine Museum is not without some controversy. In an article in Le Monde (January 2011) we can read that in 1960, when he was 70, Ossip fathered a son with his model, a young Danish woman. This son, now a psychiatrist living in Denmark, petitioned the City of Paris, to which Prax had donated the museum and its contents, for the rights to his father’s estate. But let’s not worry about that.  The museum is small and intimate. Set back from the street, it is on a much more human scale than the Bourdelle museum. (Figure 10, Figure 11) The garden path that wends its way from the house to the studio and then around it, are filled with Zadkine’s works. (Figure 12, Figure 13) As the museum website notes, the ensemble is a haven of peace and quiet. I saw a temporary exhibition there in February called ‘The Dreamer of the Forest’ which beautifully integrated Zadkine’s wood and stone sculptures with photographs, paintings and sculptures of his contemporaries and ours. I’m still angry that another female artist has been reduced to ‘carrier of the flame’ status. But I learned about her and now, so have you !  (Figure 14, Figure 15) Visit the museum when you can, it is lovely. Then wander over to Rouchoux for some chocolates on your way to the newly refurbished Hotel Lutece for a drink or Bon Marche for some retail therapy, both are only minutes away from rue d’Assas. 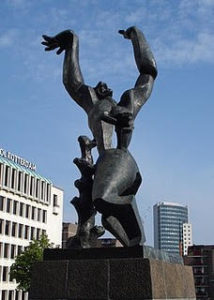 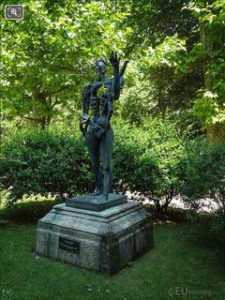 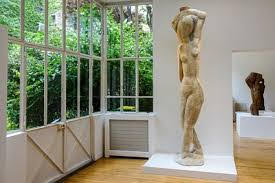 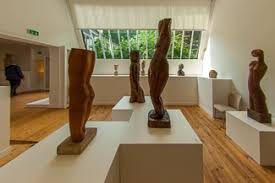 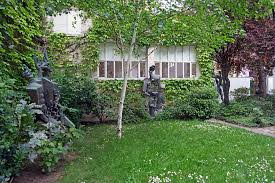 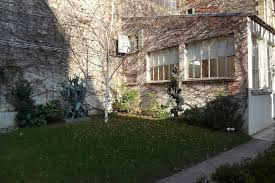 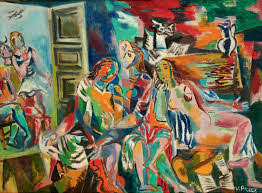 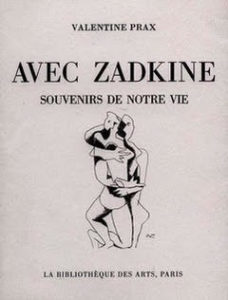 Now I'm mad too that she took him back - I can't stop staring at her startling colors and compositions - what a fabulous artist.

What a great article. I’ll be rushing of to visit it as soon as I can get away from my computer screen.

Brilliant review ! Look forward to your curated list of bean to bar chocolatiers in Paris!

Been there! Done that several times- till l FINALLY figured out The truth of their jealousy issues! Ha ha

A curated list by Dr. B of bean to bar chocolatiers in Paris would be a tasty read.