NEW! A YEAR IN PARIS 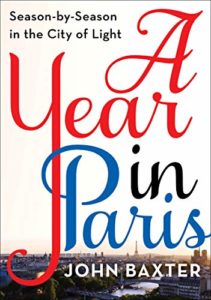 From the incomparable John Baxter, award-winning author of the bestselling The Most Beautiful Walk in the World, a sumptuous and definitive portrait of Paris through the seasons, highlighting the unique tastes, sights, and changing personality of the city in spring, summer, fall, and winter.

“A man with a great appreciation of what makes Paris tick.”— Newsday

When the common people of France revolted in 1789, one of the first ways they chose to correct the excesses of the monarchy and the church was to rename the months of the year. Selected by poet and playwright Philippe-Francois-Nazaire Fabre, these new names reflected what took place at that season in the natural world; Fructidor was the month of fruit, Floréal that of flowers, while the winter wind (vent) dominated Ventôse.

Though the names didn’t stick, these seasonal rhythms of the year continue to define Parisians, as well as travelers to the city. As acclaimed author and long-time Paris resident John Baxter himself recollects, “My own arrival in France took place in Nivôse, the month of snow, and continued in Pluviôse, the season of rain. To someone coming from Los Angeles, where seasons barely existed, the shock was visceral. Struggling to adjust, I found reassurance in the literature, music, even the cuisine of my adoptive country, all of which marched to the inaudible drummer of the seasons.”

Devoting a section of the book to each of Fabre’s months, Baxter draws upon Paris’s literary, cultural and artistic past to paint an affecting, unforgettable portrait of the city. Touching upon the various ghosts of Paris past, from Hemingway and Zelda Fitzgerald, to Claude Debussy to MFK Fisher to Francois Mitterrand, Baxter evokes the rhythms of the seasons in the City of Light, and the sense of wonder they can arouse for all who visit and live there.

A melange of history, travel reportage, and myth, of high culture and low, A Year in Paris is vintage John Baxter: a vicarious thrill ride for anyone who loves Paris

John Baxter has become a leading chronicler of Paris by viewing the charismatic city through different lenses, first walks and then by arrondisement. His current book uses the annual turn of the weather to frame the City of Light as a City of Seasons explored through a characteristically charming collection of essays. The spine of any Baxter book is always the interesting historical anecdote illuminated by personal reminiscence, amusingly told in the avuncular style of a cityfied Peter Mayle.

A well-made point in this book is that Paris is a long-running urban experience set in tension with a surrounding countryside defined by its dedication to land, and nothing quite defines the rural experience like the changes of the seasons. One of the themes that Baxter dips in and out of during this book is the revolutionary calendar which renamed the twelve months of the Gregorian year that has come down to us from Roman times. The Revolutionary Committee, guiding the creation of a new France to replace the corrupt Bourbon monarchy, commissioned in the 1790s a new revolutionary calendar with new names for the months based on their characteristic weather or agricultural nature. The beginning of the new revolutionary year was reset to the newly named month of vendange which supplanted September. This renamed month and this new annual start date celebrated the grape harvest by putting France’s most seasonal event in its rightful first place on the revolutionary calendar.

For readers, sitting down with one of Baxter’s books is to stroll the streets of Paris from an armchair, to take a tour of a city that lends itself to the virtual traveler or absent friend of the city. Fun. Highly recommended. Paul A. Myers

I read John Baxter's A Year in Paris. For me. It read like an historical diary, with
his own personal experiences plus historical ones. My knowledge of the French Revolution is minimal. We recognize easily the names Danton and Robespierre, but Fabre d'Eglantine was a new one to me. His connection with changing the calendar, getting rid of anything religious was most interesting. I did more reading about him. The book is really packed with so much information even up to modern day.
I was touched by his reference to the Alfred Dreyfus statue that had been vandalized and noticed by his five year old daughter, Louise I remember seeing the film "The Life of Emile Zola" which dealt with Zola's involvement in the Dreyfus case with his open letter J'Accuse published  13 January 1898 in the newspaper L'Aurore.
Upon seeing the film, even though quite young.  I was so moved to see how this man suffered such an injustice and disgrace. And it is still going on!
This is a profound little book and I urge others to read it.
Angela Bellante, Petaluma, CA