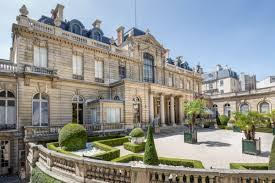 We have been talking about museums created by artists or for them, like the Rodin, the Zadkine, the Delacroix. And we have been talking about museums created by collectors, like the Nissim de Camondo, the Cognacq-Jay and the Jacquemart-André. I have spoken about the collectors whose purchases form the permanent collections of the first two museums, but I have discussed only temporary exhibitions at the Jacquemart-André. Today I shall rectify that omission and discuss the genesis of the permanent collection. And why today you ask ? Well, I had the opportunity to travel a few days ago to the Abbaye de Chaalis. (Figure 2) Which is what, you ask ? Which is actually the second Jacquemart-Andre Museum, which (amazingly, for me) I had never visited. 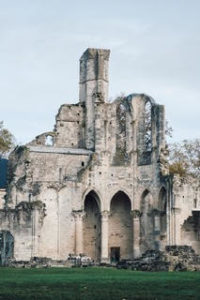 Nurse or Purse. Have you heard that expression ? It is about old men and new wives. An old man, we are told, marries for one of two reasons, either he is ill and needs a nurse or he is poor and needs a purse (i.e. financial support). And thus it was with Édouard André. (Figure 3) He was born in 1833 into a wealthy family of Protestant bankers from Nîmes. Have you ever been to Nîmes ? If not, you really must go, it is brimming with important monuments. For example, a Roman amphitheater, the Arena, a Roman aqueduct, the Pont du Gard and an exquisite Roman temple, the Maison Carrée. It was in front of the latter that Thomas Jefferson sat and gazed, and I am quoting the slave owner himself, “like a lover at his mistress.” (Figure 4) And even if you are not a fan of either Roman architecture or Thomas Jefferson, Nîmes is noteworthy if you wear jeans. The word denim comes from Nîmes, ‘de Nîmes’.  The word ‘jeans’ btw, comes from the French spelling of the Italian city Genoa, Genes. But I digress. 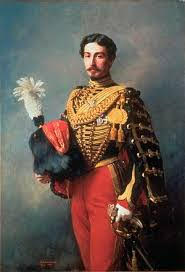 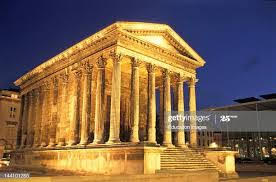 Édouard André succeeded his father as MP of Gard, (just outside of Nîmes) a position he held through 1870. A supporter of Napoleon III, after the fall of the Second Empire, he joined the National Guard. After France’s defeat in the Franco-Prussian War, he joined with another important banking family, the Rothschilds, to negotiate the amount France had to pay Germany and to find the funds to pay it. Exciting times, maybe, but enough was enough and he decided to abandon politics and concentrate on the French paintings, furniture and decorative arts he had been amassing.  It’s like the excuse politicians use when they lose their taste for politics - they want to spend more time with their family. But André didn’t have a family, he had an art collection. And  he wanted to spend more time with it. And he wanted a new house to house his collection. He commissioned the architect Henri Parent (whose design for the new Paris Opera House had come in second, after Garnier) to design a grand mansion on the new Boulevard Haussmann. (see above, Figure 1) The resulting hotel particulier is monumental and gorgeous. There are State Rooms where André’s French paintings, furniture and decorative arts are displayed, among them, paintings by Chardin, Boucher and Fragonard. (Figures 5, 6. 7) There are sumptuously decorated private bedrooms and sitting rooms. There is a Winter Garden which, according to the museum’s website, the architect designed to surpass Charles Garnier’s new Opera House. (Figure 8) Between the ground floor and the first floor are two curved staircases up to the Italian painting and sculpture collection and whatever temporary exhibition is on offer. Along this elegant staircase is a Tiepolo fresco. Seriously, a Tiepolo fresco. You know Tiepolo, the 18th century Venetian painter, mostly of exquisite frescoes for exuberant palazzi scattered throughout the Veneto.  Experiencing the fresco is simply too wonderful. You walk alongside and feel as if you are there yourself, with the Doge, welcoming the French King Henri III to the Villa Cantarini. (Figure 9) A lounging youth invades our space and makes us feel even more a part of the scene. (Figure 10) And as if that weren’t enough, if you eat in the museum’s cafe, which you must, you will be sitting under another Tiepolo, that’s right, there is a Tiepolo ceiling fresco in the cafe ! 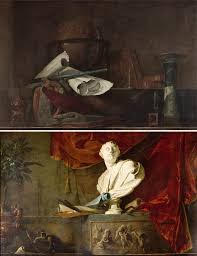 Figure 5. Attributes of Science and the Arts, Jean-Baptiste Chardin, 1731 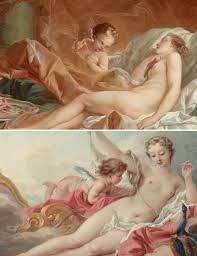 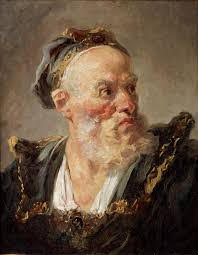 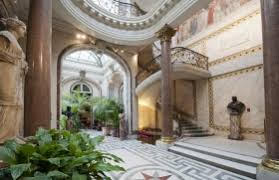 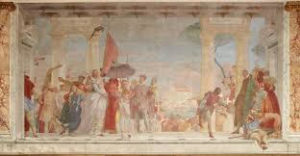 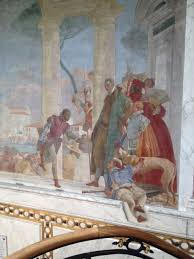 But wait, André collected French art, where did all the Italian art come from ? And that brings us to Nélie Jacquemart whom Édouard André married in 1881.

(Figure 11)  And she was who, please ? Cornélie Barbe Hyacinthe Jacquemart, to give her full name, was born in 1841. Her father, who died shortly after (or before, sources vary) she was born, worked as a sort of campaign manager for a politician in his town. His family might have been notaries. Her mother was a milliner, a hat maker, whose family might have been boulangers. We don’t know much about Nélie’s roots because she apparently destroyed letters and documents that would have provided any information. But she was obviously not a member of the same class as the man she was to marry. Luckily, her artistic abilities were apparent from a very young age. And she became the protégée of the wife of her deceased father’s boss, Pamela De Vatry. Nélie spent summers at the de Vatry’s hunting lodge in the former Abeyee de Chaalis, just outside of Paris, to which we will return. Thanks to Mme. de Vatry, Nélie enrolled as a private student of a professor at the École des Beaux-Arts, Paris. Private, of course, because the École did not accept female students. By twenty two, she was exhibiting her work. At 25, she traveled to Italy to study with the Director of the French Academy in Rome. Her life long love of Italian art in all of its manifestations was born. 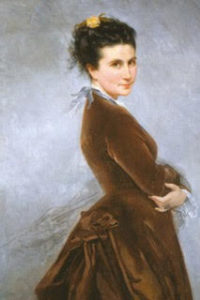 The Franco-Prussian War had convinced Édouard André to abandon politics, for Nélie, it brought a commission to paint the portrait of the President of France, Adolphe Thiers. Soon afterwards, Nélie was called upon to paint a portrait of Edouard Andre. (Figure 12) He was 39, she was 31. Nine years later, they married. After 9 years, it obviously wasn’t a coup de foudre. So what was it ? Why did a wealthy bachelor, 48 years old get married at all ? Well, apparently Andre’s carefree bachelor days had been a little too carefree and by the age of 48, he was ill with syphilis. His family wanted someone to take care of him and Nélie, if I am reading between the lines correctly, had lost her true love during the Franco-Prussian War. So it was a marriage of convenience which seems to have worked out pretty well. Lots of money, lots of shopping, no sexual demands, no sexual disappointments. They traveled extensively and bought constantly, mostly Italian art because that is what she loved and what he came to love, too. Their Italian Renaissance masterpieces include a painting of St. George Slaying the Dragon by Paolo Uccello which is one of my favorites, (Figure 13) a Botticelli Madonna and Child, and an Ecce Homo by Montagne. 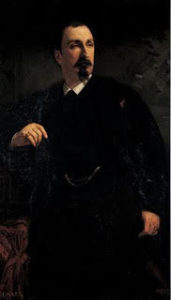 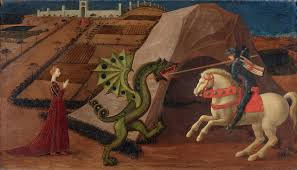 Édouard André died 13 years after he married Nélie. Now that they no longer needed her, his family tried to gain control of his estate. They took Nélie to court, she won. And she continued traveling and shopping, shopping and traveling. In 1902, on her way to the Orient, she received word that the Abbaye de Chaalis was up for sale. Through an intermediary, she bought it. (Figure 14) Imagine what that must have been like for her. The little Catholic girl who had spent so many agreeable summers as Mme de Vatray’s protégé. The portrait painter who had snagged the rich banker.  Now, here she was, the owner of a property she had known since childhood. Her ways had been winning enough, her presentation acceptable enough, her talent respectable enough, for her to access to a social milieu not her own and in which she stayed.

The Royal Abbey of Chaalis was founded in 1137 by Louis VI. A century later a chapel dedicated to the Virgin Mary was consecrated. When Francois Premier, king of France named Ippolito d’Este, Chaalis’ first abbot in 1541, he commissioned the Italian artist Primaticcio to paint frescoes in the Chapel. (Figure 15) The French Revolution brought considerable damage and destruction. In 1850, Nelie’s protectress, Madame de Vatry acquired the estate. For the next thirty years, during which time Nelie spent her summers there, Mme de Vatray modified and improved the property. She had the chapel and its frescoes restored and she converted the Château into a ‘Maison de Plaisance’. It was sold and bought twice during the next 20 years. When it went up for sale again in 1902, Nelie jumped at the chance to buy it. She wanted a country home and she needed more space for her ever growing collection. She continued to improve the property, restoring and renovating and adding running water and electricity and telephones. 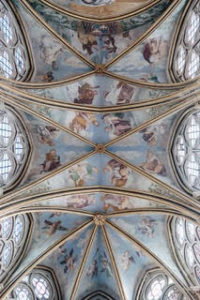 In what is called the Monks’ Room, which has the most amazing fireplace you can imagine with a huge Stag on it, there are two paintings by Giotto !!! a Saint John and a Saint Lawrence. (Figure 16) If you can tear yourself away from this room, a little farther along a very long and wide corridor (Figure 17, Hall of Mirrors anyone?) there is a room filled with objects from Nélie's travels to Egypt, Turkey, Burma, and India. Like the museum on Boulevard Haussmann, we can glimpse at Mme’s bedroom, billiard room and salon where she lived and entertained. (Figures 18) 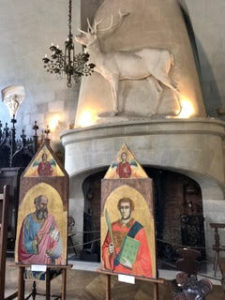 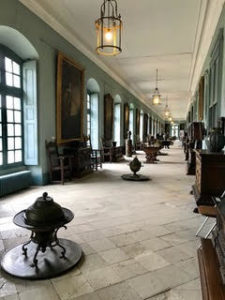 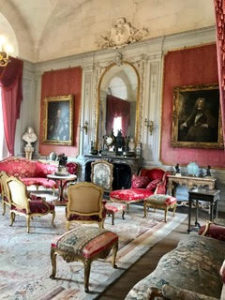 Nelie died in 1912. In her will, she bequeathed the hotel particulier on Boulevard Haussmann and the Abbaye de Chaalis, to the Institut de Paris. Between the two properties, there are more than 4000 objects which include sculptures, paintings, furniture, tapestries and much much more. The Jacquemart-Andre Museum opened the year after her death. Since 1996, Culturespaces has been responsible for creating and presenting two temporary exhibitions annually at the Musee Jacquemart-Andre in Paris. I have seen quite a few of these exhibitions and they are consistently first rate. Currently an excellent Turner show is on. The next time you are in Paris, you simply must come. It is a gift from Nelie to us all. (Figure 19) 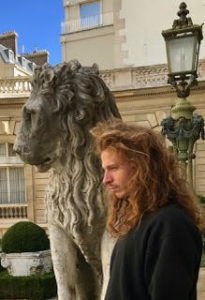 igure 19. My son the glass blower outside the Jacquemart-Andre, last year, posing with the lion

THE PROPERTY & CONTENTS WAS DONATED TO INSTITUT DE FRANCE

Sassy story of a clever triumphant woman. I love the museum, especially in the Winter Garden room. Having tea there was a dream too. I’ve now added the Abbaye to my list.

I wait for each of your articles to arrive which I read and garner new and most interesting facts about the museums and art galleries that I treasure You inspire me to revisit all and now a visit to Nimes is an imperative.

Exquisite review of both museums, as always, what we have come to enjoy from Dr B!

I've been the Jacquemart-Andre museum and after reading your article, I will be going back as soon as Paris opens. I learn so much more that the museum offers by your excellent details. Thank you Beverly. Oh how I miss Paris and you, too.

Dr.B you have filled in a lot of a blanks concerning Nellie that I had not MY FAVORITE musee in Paris! The front walls go down into the floor on hydraulic jacks! Party time! Also love the Winter Garden and the cafe have eaten out there and feel right at home. Merci for all the extra tidbits. Much appreciated. Best of the Holidays Jacquelyn Goudeau

This museum is my favorite must-see spot in Paris. The tea room is heaven too. Thanks for your erudite comments as alwayscc

The Ecce Homo is by Mantegna not Montagne.