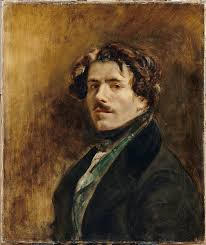 Let’s talk about another home museum, shall we? Home museums generally fall into two categories, the grand residences of art collectors, like the Jacquemart Andre and the Nissim de Camondo museums or the more modest homes and studios of artists like Eugene Delacroix, today’s subject. This museum is in one of the most recherché areas of the beautiful city I now call home. I don’t know if you have visited the Musée Delacroix, but you have surely walked by it and around it many times, especially if you are as addicted to the 6ème as most people are.

A couple of years ago, in conjunction with the Metropolitan Museum in New York, the Louvre held a grand retrospective of Delacroix’s career. (Figure 2) It was the first Delacroix exhibition in France in nearly 50 years. While I prefer smaller, thematic exhibitions, if any institution can pull off a blockbuster, it’s the Louvre. Like the Leonardo show last spring, which didn’t include the Mona Lisa, Delacroix’s most famous masterpieces, which are mostly at the Louvre, remained in their usual place during the exhibition. Most people go to the Louvre for the permanent collection. They want the masterpieces on their list, to be where those masterpieces are supposed to be. Over half a million people attended the Delacroix show, the most ever to that date. The following year, the Leonardo exhibition doubled that attendance record ! 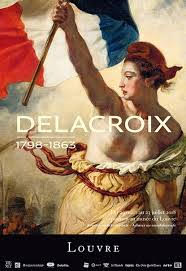 Why am I talking about the Louvre? As a segue, of course, to tell you that when you purchase a ticket to the Louvre, you get a free entry to the Delacroix Museum. Is there a hitch? Of course, this is Paris ! The ticket is only valid for 48 hours.

Okay, back to Delacroix’s house and studio. I used to spend quite a bit of time here when my son, now 26 and now a glass /graffiti artist (don’t ask), was little. After our summers in the Dordogne, we needed a week in Paris, at a hotel somewhere in the 6th, to prepare for our return to city life in San Francisco. But Paris was a difficult transition for a little guy, so we often found ourselves visiting museums with gardens where he could hang out, like the Delacroix, the Rodin, the Cluny. While I got my museum fix, my daughter and husband tag teamed taking care of Nicolas and joining me in the museum for impromptu discussions, and if I am honest, lectures. Don’t ask which task they found more agreeable !

The Delacroix Museum is in one of the most magical squares of Paris, the place de Furstenberg (Figure 3) which you will know from walking along the rue de Seine toward rue Jacob, maybe on your way to rue de Bucci to get a poulet roti for a picnic or on your way to L’Entrecôte on rue Saint Benoit where the only French you need is ‘a point’ (or saignant) for how you want your  steak cooked and ‘oui, rouge, maison’’ to answer the next series of questions, about what to drink. For dessert, they hand you a card with pictures, point to what you want, easy as that. But I digress. 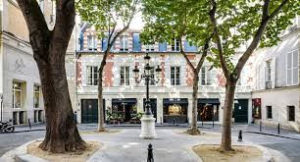 The place de Furstenberg was built in the 17th century, as part of the Abbey of Saint-Germain-des Prés. Access to the Delacroix Museum is through the courtyard and up the monumental staircase which Delacroix installed when he moved here in 1857.  The museum is small, with one room set aside for visitors to read, watch films, videos, etc. It also leads to a wooden and metal staircase (based on the one Delacroix built), which descends to the garden and in it, the atelier, also designed by Delacroix. The garden, refurbished by the head gardener of the Tuileries in 2012, is particularly lovely. Although no specific drawing or sketch survives to document what the garden looked like during Delacroix’s time, the space now reflects Delacroix’s own love of abundant country gardens. (Figure 4) 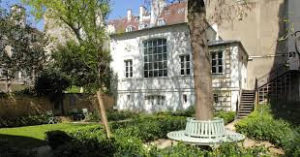 I hadn’t been to the Delacroix Museum for a while and the show at the Louvre had whetted my appetitive for more. A temporary exhibition, which began right after the one at the Louvre ended, was as good an excuse as any to visit it and happy memories again.  The exhibition took as its focus the mural paintings at Saint-Sulpice. The exhibition included Delacroix’s own sketches and studies as well as with works by artists who influenced him, like Raphael, Titian and Rubens, and works by 19th and 20th century artists who were influenced by him, like Gustave Moreau, Odilon Redon and Marc Chagall. Not one to let a teaching opportunity pass me by, after the exhibition, my son and daughter and I walked over to the Church of Saint Sulpice to see the murals. I was certainly not an ‘early adapter’ when it comes to technology, but I can’t tell you how nice it was, in a pedagogical kind of way, to gaze upon Delacroix’s mural of Heliodorus Driven from the Temple  (Figure 5) and then, using my iPhone, show them Raphael’s version. (Figure 6). Nothing warms the cockles of an art historian’s heart than the ability to compare and contrast two images !

Figure 6. Expulsion of Heliodorus from the Temple, Raphael, Vatican, 1511-13

But wait, everybody knows Delacroix, right ? Massacre at Chios, (Figure 7) Death of Sardanapalus, Liberty leading the People (Figure 8) ? Now all at the Louvre. I love those paintings, movement, emotions, history, allegory. But I am getting ahead of myself, herewith a brief bio. Delacroix was born on April 26, 1798, near Paris. His father, Charles, who died when his son was 6, was a career diplomat whose postings kept him away from Paris where his young wife and young son lived. Actually Delacroix’s father was definitely not his biological father because at the time of his conception, Delacroix's father had some sort of medical condition (believe me, you don’t want to know, or if you do, google it) and was sterile. The possibilities include diplomat-politician, all around sleazy guy, Charles Tallyrand, a known lecher. He may have had a thing for Delacroix’s mother but he was definitely responsible for all of Delacroix’s father’s postings. And at any rate, whether he was the painter’s biological father or not, Tallyrand seems to have thought he was, because he helped the painter in any number of ways. Good lesson here for all of us, re: adultery. 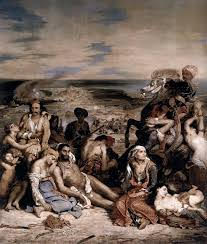 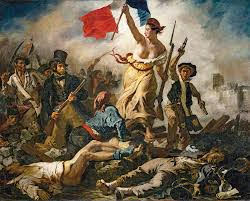 In 1822, at the age of 24, Delacroix exhibited at the Salon for the first time. A painting called the Barque of Dante which immediately identified him as a Romantic artist, a term inspired by literature but which, in fact, moved across genres, in the first half of the 19th century. Like a pendulum, Romanticism was a reaction against late 18th century Neoclassicism, the former dry and static, the later emotional and vibrant. Yet, Delacroix’s subjects - classical, biblical and historical - were the same as those depicted by Neoclassical artists. Caravaggio had managed the same startling innovations during the Baroque period, transforming biblical and classical subjects into down to earth, humanized representations. In Neoclassical painting, form and composition are outlined and then filled in with color. Romantic artists go from color to contour. The same battle had raged during the Italian Renaissance with the Florentine emphasis on Designo or line, competing with Venetian emphasis on Colore or color.

In 1827, Delacroix exhibited a painting the Salon considered over the top, the Death of Sardanapalus. (Figure 9) Inspired by a play written by the English poet Lord Byron, the work shows the oriental sovereign Sardanapalus at the top of a pyre directing his servants to pile all of his possessions onto it with him, to die with him - wives, horses, objects. Victor Hugo and Alexandre Dumas loved it, the Academy hated it. Where, they asked, was the edifying message ? 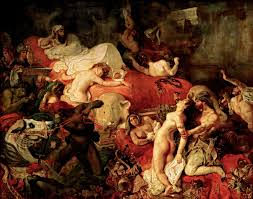 How did the museum come about, I hear you asking. Did Delacroix, like Rodin, plan a museum for himself or like Bourdelle have a wife and daughter to see the idea through? If so, who carried it out, if not how did this glorious museum set amidst some of the most expensive real estate in Paris, happen? Details, woman! Okay, I hear you! Delacroix died in 1863, at his deathbed, was his servant, Jenny, who had managed his household for over 30 years. Three years later, following his will, his estate was sold. Nearly 70 years later, the property was scheduled for demolition. At that moment a group of painters, collectors and curators, none of whom had any direct connection to Delacroix, but moved by their appreciation of his work and his writings, decided to save it. The Foundation of the Society of Friends of Eugène Delacroix was born, under the chairmanship of Maurice Denis.(Figure 10) The Atelier of Delacroix opened in 1932; in 1971, it became a national museum. Twenty years later, the building was entered into the Inventory of Historic Monuments and in 1992, the adjoining apartment was acquired. In 2004, the Musee Delacroix became part of the Louvre museum, where most of Delacroix’s most important paintings are. His murals, commissioned by various civic and religious patrons, from the Salon du Roi at the Palais Bourbon to the decorations of the Chapel of the Holy Angels in Saint-Sulpice, are all over town 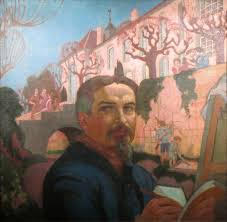 You really should go to this museum. First go the the Louvre, bien sur, then in the next 2 days, while your ticket is still valid for free entry into this museum, come here, Try to coordinate your visit with a temporary exhibition, one is held annually. Then stroll around and have lunch or dinner at l’Entrocote or any one of the area’s many wonderful restaurants (when, fingers crossed, they open). Try to remember to visit examples of Delacroix’s mural paintings throughout the city, a link to them is provided below and is sometimes available as a paper pamphlet at the museum.