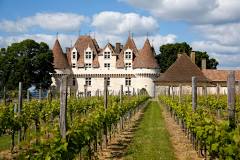 Monbazillac is one of the classic sights of the Perigord, a fairytale castle of stone towers, each topped by a conical roof to produce an extraordinary and happy marriage of medieval fortress and Renaissance chateau. Perched atop a verdant hillside and dominating the Dordogne valley below, its light-grey stones can become honey-coloured in the sunshine, or a delightful roseate pink at sunset.

The interior of the chateau has long been less than jnspiring but now it has been transformed. I was delighted to be invited to the formal opening of what is likely to become a prime tourist site in future, aiming at 100,000 visitors a year.

It deserves to get them. At a cost of some 2 million euros, financed by the state, the département, and the local wine co-operative which runs the vineyard and produces the eponymous wine, the interior has been re-designed into four main areas.

On the ground floor is an excellent and informative display of the role of Bergerac and the chateau in the 16th century wars of religion, when Begerac with its rare strategic bridge over the river was a main Protestant stronghold. On the first floor is a charming exhibition of the time of the French Revolution, during and after which the Bacalan family had refurnished the chateau with Enlightenment elegance.

Francois Hillaire de Bacalan was an aristocrat who was sympathetic to the early goals of the Revolution, supporting the idea of an English-style constitutional monarchy. His son was more radical, volunteering to join  the Revolutionary armies, and his son-in-law was a member of the Constitutional Convention.  Audio-visual techniques are used to allow us to eavesdrop on history; they re-create the family at dinner, talking politics in the main sitting room, and the womenfolk talking of manners anf duties in a bedroom.

The second floor has been turned into an exhibition space for changing displays of  modern art, sculptures and paintings. The cellars in the basement have become a play space for children, where they can imagine themselves as little winemakers.

The buildings that guard the entrance to the imposing alley between the vines that lead to the chateau have also been transformed. The old tasting and sales centre for Monbazillac wine has been overhauled, The formerly cramped tasting space now takes up an entire wall, with windows looking onto the chateau.

The wines are far better displayed, not just the classic Monbazillac but the excellent new wines they have been making more recently, There is a new range of everyday drinking wines called Euphonie, at 7.50 euros a bottle and 9.50 for the Monbazillac dessert wine, all of them charming and very drinkable wines.

Then there is a wine called the Secret de M, in red and white, at 12.50 a bottle, which is a more serious wine. The white I thought extremely successful, with a rich bouquet and an impressive feel in the mouth and aftertaste. The red 2019 is a sinewy, rather solemn wine that would benefit from a little more time in the bottle but it is drinking very well already.

The classic Monbazillac wines, of the 2014, 2015, 2016 vintages are 20 euros each and I recommend them. The co-op managers have also taken over a modest vineyard near St Sauveur to produce their own Pécharmant called Chateau of Champterac, which is an excellent buy at 10 euros.

There is an entirely new education centre on wine which is a model of its kind, not simply explaining what makes the Monbazillac dessert wine different but also how it is made, step-by-step. On the formal opening evening, we had to be rushed through but I shall return to explore at greater leisure. Its explanations are in French and English, as are the explanatory panels inside the main chateau.

What I found remarkable about all this is that it is all the work of a co-operative of some fifty winemakers, who banded together sixty years ago not simply to make wines, but to buy and restore the chateau of Monbazillac as a kind of civic homage to their land and heritage. The tradition of local solidarity between ordinary people has procured a very impressive commercial and cultural operation that is evidently looking forward with confidence to the future just as they honour their past.

They understand that they are custodians of a place and terroir that embodies a thousand tears of history. It harks back to the 11th century when legend says that the monks of the Abbey of St Martin forgot to harvest their grapes in time. The noble rot set in, and the Benedictine monks found that their tardiness had produced a miracle; the luscious and sweet dessert wine we know as Monbazillac, named for the Hill, or Mont, of Bazhaillac.

The castle itself is almost five hundred years old, sited to dominate the valley and the town of Bergerac with its crucial bridge over the river Dordogne. The Hundred Years War began nearby at Montcuq in 1345, when the Earl of Derby with some 2,000 men at arms and around 5,000 archers surprised the French, chased them to Bergerac and forced his way across the bridge with the help of a panicked horse which prevented to iron portcullis from closing.

That war ended just over a hundred years later, in 1453, when the last English army under the legendary John Talbot, Earl of Shrewsbury, was defeated at Castillon, where the massed guns of the French artillery finally provided a decisive answer to the previous dominance of the English lowbow. The same year as the fall of Constantinople to the Turks, Castillon was, in a way, the dawning of the modern age, a prelude to the Renaissance.

The English, evicted from all of France but Calais, turned their energies to the open seas. For the next two centuries their rivals were the Spanish and increasingly the Dutch, who became by the 17th century the main market for the wines of Monbazillac. A century later, under the name of Muscat, the wine of Monbazillac had become the favorite tipple of King Frederick of Prussia. When you open a bottle of Monbazillac, you are drinking liquid history.