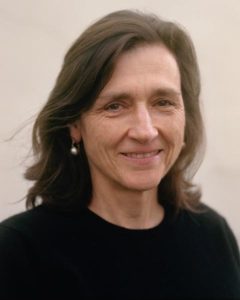 Mary Fleming, author of SOMEONE ELSE and THE ART OF REGRET met me at LES DEUX MAGOTS to discuss her life and work.

1. When did you first come to Paris?

I first came to Paris in 1981, to marry my first husband who is British and whom I’d met in England on a junior year abroad, the experience that gave me the Europe bug in the first place.

I stayed married long enough to have three children and a steady job. By then Paris was home.

3. What did you do before you started to write?

At first a lot of this and that. Freelance journalism and consulting. I worked for a while as the assistant to Jane Kramer, who was The New Yorker correspondent in Paris in the mid-80s. Then I landed a job as representative in France for an American foundation, the German Marshall Fund, which works to improve US-European understanding and cooperation.

4. Why did it take you so long to become a writer?

I had been scratching away secretly for many years. Why I didn’t declare myself sooner mostly comes down to being scared of failure. After a while, that seemed a pretty poor excuse.

5. I enjoyed both of your books and as a “Frenchman” was impressed with your grasp of quotidian Parisian life like the small details in a painting that collectively fill the canvas. Did you do extensive research or was it anecdotal and personal experience?

Most is based on personal experience—I have lived here close to 40 years—though I do research the city’s geography and history. Paris, really, is a character in her own right in both novels. For Someone Else I read a lot about World War II, as it is an important backdrop for the story.

6. You talk about labor conflict and strikes in 1995-has anything changed?

Yes and no. France is more open to the world than it was then. Many more people learn English, live abroad for a while. But the resistance to a global, liberal economy is still strong—look at the gilets jaunes movement. On some level nothing has changed since Louis XVI lost his head. The French Republic remains monarchical, with the president the king (Jupiter, in the case of Macron) and the high-level civil servants around him his court.

7. You reference WG Sebald and the Emigrants-was he someone who influenced you as a writer?

Yes, I am a big fan of Sebald. Memory, the past, displaced persons are important themes for him and for me. He writes a lot about the reverberations of the Second World War on Europe. I agree with him that we cannot leave our pasts behind us. Also, I find his prose mesmerising.

8. In both of your books there is a reckoning with the past of things unsaid, secrets unrevealed. It made me think of things I would have liked to have asked my mother but didn't. Were these reflections of your own life or just an observation of the lives of others?

A combination. I have a friend who had a suicide in the family that was never discussed and I could see how it weighed upon her as a person. When the story was finally aired, it really helped her. Well after I’d already started novel writing, I learned about some secrets in my family and I could see how they had weighed on me—they had snuck their way into my writing, provided the basis for both novels, without my knowing the stories. It proved to me what a strong force subconscious awareness is. I’ve since come to think these family stories resonate through generations on some subliminal level.

9. What is your next project?

I’m working on a novel about a young American woman who has just arrived in Paris and an old one who has lived here for decades. It takes place in the early 80s in an hôtel particulier on the place des Vosges that is largely deserted. Until some squatters move in.