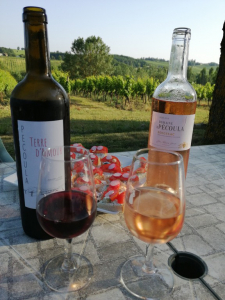 I first came across Domaine de Pécoula as a producer of the sweet, golden wines of Monbazillac at the Concours where a large jury makes the selection of the best of the year. It is one of the hardest tastings I know, since after tasting four or five, the mouth begins to pucker up and the taste buds feel overwhelmed. A sip of water and a mouthful of dry bread between the different bottles bring some relief.

The bottles are always wrapped in impenetrable black socks to keep the winemakers anonymous.. But when one is faced with twenty or more different versions of the same wine type, trying to assess the tiny variations of bouquet and taste, it starts to feel like a marathon. After the judging and the announcement of the winners, we jurors are able to take the socks off and find the ones that we particularly liked, and one of the best for me was the entry from Pécoula so I resolved to pay them a visit. Then came the Covid lockdowns and it slipped my mind until a knowledgeable friend said I should also try their dry white wines

I usually start with the website to get a sense of the size of the vineyard, its location, how long it has been in operation, whether it is organic and so on. Pécoula is almost ten kilometres due west of the Monbazillac chateau, and two km south of Pomport, on the plateau of those gently rolling hills after the long rise from the plain of the Dordogne valley. This is good wine country, especially for Monbazillacs, since they are close enough to the Dordogne valley to benefit from the mists that help the magic fungus of botrytis to flourish. La Grange Neuve is a neighbour and one of my favourite vineyards, Chateau Bélingard, is nearby.

Domaine de Pécoula also won a gold medal at the big Concours at the Paris agricultural fair in 2018 for their Monbazillac 2016 vintage, and took the silver medal the next year for their 2017 version. That is very impressive. And they are now in the final year  of their transition to a serious organic status, entitled to put the green leaf and the letters AB (for Agriculture Biologique) on their labels.

‘I had wanted to go organic for some time but my brothers were uncertain,’ the owner, Jean-Marie Labaye, told me. ‘I want to do it not for fashion but because it is better and healthier for us and our workforce, better for the land itself and for the wine.’

Not to be found on the website is the information that Jean-Marie is also treasurer of the Dordogne branch of the Vignerons  Independents, a body formed some forty years ago which now brings together more than 7,000 winemakers across France who work on their own account and not as part of a cooperative. They organise an annual salon, the largest in France that is open to the public, with some 5,000 wines to be sampled.

Jean-Marie and his wife Christine took over the vineyard from his two older brothers in 2018. The youngest of eight siblings, Jean-Marie was raised in the house where he now offers tastings, grew up with the rhythms of the grapes and the seasons and was born with wine in his blood. His grandfather first bought the property in 1936. Christine was the daughter of a farmer but adapted easily to life among the vines. They have two grown daughters, neither of whom seems committed to a life in wine.

‘It is so many ways an enriching life,’ Christine told me. ‘There is the commercial side and the office work, the communications as well as the harvest and the making of the wines, always different, and so much of our time is spent in this lovely countryside and in the open air.’

They have 33 hectares of vines, of which 25 hectares are devoted to Monbazillac, the rest to Bergerac whites and reds, and vins moelleux. The reds are 30 percent Malbac, 30 percent Cabernet Sauvigon and forty percent Merlot.

The real surprise came when I looked at their price list. The whites, rosés and reds are 5.50 euros a bottle, when bought at the vineyard, and the standard bottle of Monbazillac is just ten euros, and 12.50 euros for the 2017. In good years, they make a prestige red which they call a Cotes de Bergerac, a sinewy and complex wine of real character. The 2019 vintage is 7.50 euro a bottle and the 2017 is10.50.

These are bargain prices for wines of serious quality. I bought six of their dry white wines and some of 2017 Monbazillac which I’m pretty sure was the one I liked so much at the Concours in 2019. My neighbour, Raymond, a retired captain of gendarmes who is also my regular tasting chum, bought a mixed case of whites and reds.

I usually drink Monbazillac, always chilled, as a digestif or sometimes with blue cheese, occasionally as an apéritif, but ever since being presented with a copy of Jean-Francois Vidalie’s magisterial book on the wine, its history, geology and place in French life, I have been tempted to try a recipe he suggests.

To begin, take a large bunch of chasselas grapes, remove stalks and pips and macerate them in a third of a bottle of Monbazillac. Then take a whole fresh foie gras of some 500 grams, slice it into 6 segments, flour it lightly on both sides and place them in a large frying pan, already hot and well-oiled with duck fat. Salt and pepper them and grill six large slices of bread while the foix cook, turning them once. He does not suggest a time but other friends of mine suggest long enough to sing the Marseillaise, which takes me 45 seconds. I would not give them much more than a minute each side. Remove from the flame and place the foix on the grilled bread on a pre-warmed plate and garnish with the grapes. Then deglaze the pan with a little wine vinegar and the Monbazillac in which the grapes macerated, (and you may add two soup spoons of veal stock if you wish). When it has reduced to your taste, again no more than a minute at most, pour it as a sauce over the foie and serve.