Leonardo at the Louvre

The Leonardo exhibition at the Louvre is lovely. The exhibition space is ample and even with lots of people in the space with you, it isn’t crowded. There is a joy an pleasure in looking at many things and lingering at the few (or many!) that intrigue you.You really must try to see it ! 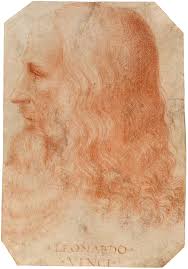 The exhibition, a commemoration of the 500th anniversary of Leonardo’s death is divided loosely into four themes: Light, shade and relief; Freedom; Science; Life and moves chronologically from Florence to Milan and back, then on to Rome, and finally to France. The exhibition is a wonderful combination of drawings, sketches and paintings as well as photographic images of works both in the show and not, created by an Xray- like imaging method called infrared reflectography. Centuries old sketches and contemporary technology let us glimpse at Leonardo’s creative process, a sense of the journey from inspiration to realization, and sometimes abandonment. We learn the importance of process to this creative genius.

The exhibition begins with Leonardo’s apprenticeship in the workshop of Andrea del Verrocchio whose fame is as a sculptor. The room is dominated by one of Verrocchio’s most important sculptural groups - Christ with St. Thomas (aka Doubting Thomas) the latter poking his finger into Christ’s wound. 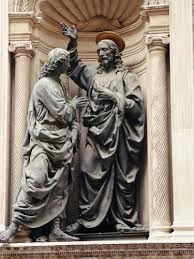 It is quite startling to see this very large sculpture in an exhibition devoted to paintings and drawings. But it must be there for a reason, no? It reminded me of a questionnaire the Florentine humanist Benedetto Varchi sent out in 1546. The Paragone (comparison) asked for comments upon the relative merits of Painting and Sculpture. Leonardo not surprisingly came out on the side of painting. He contended that the use of color to create illusionistic effects and the intellectual aspects of composing a painting required more mental ability than the physical effort and technical skill required of a sculptor. He also pointed out that a painter can wear fine clothes and listen to beautiful music as he works. A sculptor can do neither, he gets sweaty and dirty and the noise he makes is too loud to hear music! Michelangelo, with a foot in both camps, contended that painting is successful the closer it gets to imitating the three dimensional qualities of sculpture which exists in space and can be viewed from many angles while a painting offers only one viewpoint.

The debate helped move these two arts from the mechanical (those made with the hands) to the liberal (those created with the mind). Painters and sculptors came to be seen as equals to poets and musicians rather than carpenters and weavers. The social status of artists rose and academies of art were established. Academies, first inItaly and then throughout Europe, institutionalized the theoretical and aesthetic principles that emerged from the Paragone, leaving an impact on Western artistic traditions for centuries.(https://www.oxfordartonline.com/page/renaissance-paragonepainting- and-sculpture) When we think of those same academies now, we think of them as backwards institutions that thwarted avant-garde artists like the Impressionists.

But I digress. We are supposed to be looking at the painting The Baptism of Christ by Verrocchio. 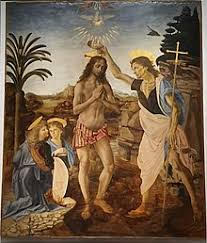 One of the two angels was painted by Leonardo. 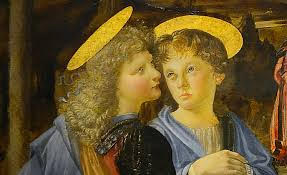 Everyone celebrates Leonardo’s angel, but I must confess that I have always preferred Verrocchio's spunkier angel. Yes, Leonardo’s angel is well, more angelic and the angel’s hair is a taste of more hair and waves to come, but there is, to my mind, something to be said for spunky. In this room, are also drapery studies. You won’t be able to tell which were done by the master, Verrocchio 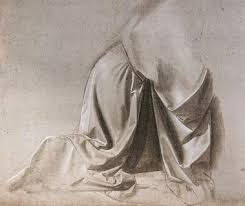 and which by the pupil, Leonardo 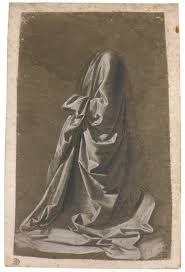 and neither can anyone else.

The next section is called Freedom and it is here that the Leonardo we know, emerges. According to the catalogue, as Leonardo sought to grasp the truth of form, which he knew to be illusory in an ever changing world, he developed his philosophy of 'Componimento inculto,’ (intuitive composition) which led to creative freedom which led to incompletion.

Leonardo’s Madonna of the Rocks, 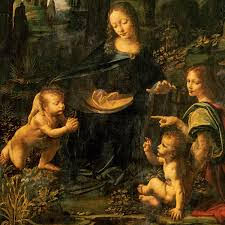 painted in Milan between 1483 - 1486, is here. The painting shows the Madonna, John the Baptist, an angel and the Christ child seated in a clearing, surrounding by botanically accurate plants and set in a grotto with rock formations behind them leading to a blue and misty distant background. Whenever I see this painting, I ask myself two questions: 1. why are people staring at the Mona Lisa when the could be staring at this painting and 2. why aren’t the hands in this painting as well known as Michelangelo’s God and Adam on the Sistine Ceiling.

The Virgin’s hand reaches forward, out, toward us, hovering over the pointing finger of the angel and the two fingers of the Christ Child raised in benediction. Those hands, hovering one atop the other are a miracle of beauty and grace. 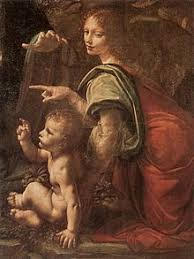 The third section, called Science, is a dimly lit space with cabinets displaying single sheet drawings and various codexes, one owned by the Queen of England, 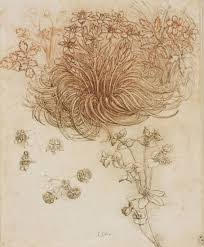 another by Bill Gates.

This section, according to the catalog is a “vast compilation of notes, studies, experiments, reflections and theories in which writing and drawing were inextricably linked.” Here Leonardo goes beyond appearances to explore how things work, how things look from the inside - drawings of meteorological phenomena and optical investigations; the musculature of a human leg and water gushing from a pipe. This room is particularly quiet, and with the only crowds in this room are trying to see the tiny Vitrivian man, 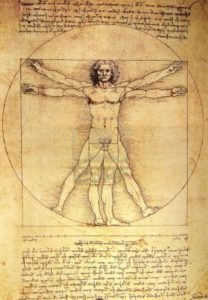 based upon the writings of the Roman architect Vitruvius who described a man fitted into a circle and a square. Leonardo corrected the abstract calculations with his own studies from nature. The fourth section is called LIFE and here you will find another Milanese masterpiece, the Last Supper, a fresco which began to disintegrate even as Leonardo painted it because of the experimental technique he used. The original is in the refectory of Santa Maria della Grazia. 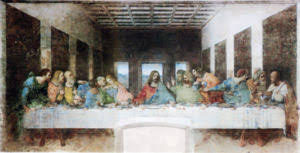 Not only is it in a very bad condition but it was cut at the bottom, directly below Christ when a door was set into the wall. So, the painting in the exhibition, by his pupils and perhaps by Leonardo himself, oil on canvas, intact and visible, is a revelation. 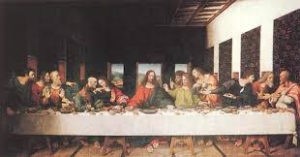 And guess what - those apostles are all wearing sandals ! I don’t know what I was expecting, but it wasn’t 26 feet and 13 pairs of sandals ! In addition to those startling statistics, numerology plays an important role here - the apostles are arranged in 4 groups of 3. Three is an important number, the Trinity, of course, and 4 is another important number - 4 seasons, 4 times of day. And 4 x 3 is important, 12 apostles, 12 months in a year. And 4 + 3 is important, the 7 Sorrows and 7 Joys of the Virgin. And Christ sits in the center with the middle of three windows behind him, his halo. Through their gestures and movements, the Apostles are waves of reaction to Christ’s announcement that one of them would betray him.

Leonardo returned to Florence in 1500. He and Michelangelo were each commissioned to decorate a wall of the Palazzo della Signoria with a painting of a

battle commemorating a Florentine victory. Leonardo’s was The Battle of Anghiari 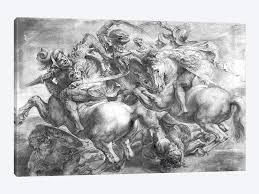 against the Milanese and Michelangelo’s was The Battle of Cascina 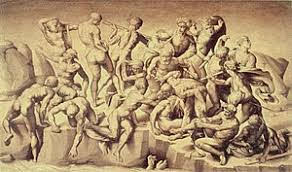 against the Pisans. Neither artist finished his work. The central scene of Leonardo’s work, called Battle of the Standard and known from copies shows the insanity and savagery of battle. Michelangelo’s cartoon (preliminary sketch) which we also know only from copies, depicts soldiers who had been relaxing in the Arno River, rushing to find clothes and weapons when the alarm is sounded that the opposing army is on its way. Both unfinished works influenced artists for generations and art historians still. The second set of commissions that pitted these two geniuses against each other may only be in retrospect. Leo Steinberg who was my professor, suggested thatLeonardo’s Madonna and Child with St. Anne 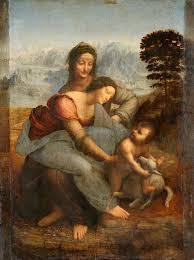 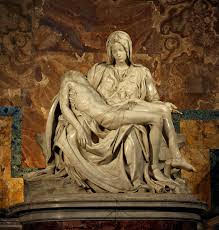 sculpted 10 years earlier. In Leonardo’s painting, one adult woman sitting on the lap of another woman is believable and naturalistic. Michelangelo’s Pieta depicts a grown adult man, the dead Christ, lying across his mother’s knees in a pose that is as naturalistic and believable as Leonardo’s painting. And thus we return to the Paragone: and the question, which is the better art form, painting or sculpture ?

I encourage you to see this exhibition. It is done so well and you will be able to learn so much. Make sure to take time to savor and appreciate it. Important note: As you walk in, there are two posts, at one you will have your ticket scanned, at the other you can reserve a virtual reality ‘tour’ of Mona Lisa. 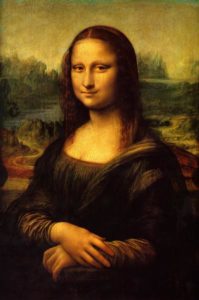 Book before you go into the exhibition because the ‘virtual reality’ tours are timed visits, the wait can be up to 90 minutes and the perfect thing to do while waiting is enjoy the exhibition.