CEZANNE and the MASTER PAINTERS 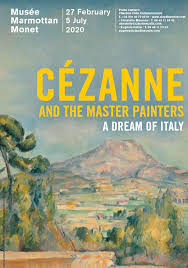 There is a new exhibition at the Musee Marmottan-Monet, “Cezanne and the Master Painters” (Figure 1). But the title doesn’t tell you what an unexpected exhibition this is going to be. For that you must read the second line, ‘A Dream of Italy’. What ? You were assuming that the Master Painters in the first line were going to be the usual cast of characters - Impressionists, definitely, Cubists, probably. But no, this exhibition is not going to prove yet again that Cezanne was the pivot, hinge, link, whatever, connecting Impressionism to Cubism, Monet to Picasso. Because with this exhibition we are going to Italy and it might be the only way we are going to get there anytime soon. So grab your mask and hand cleanser. On y va!

You may remember the last exhibition at the Marmottan, on the early career of Mondrian. We were told that the Marmottan was the perfect venue to present the collection of a single admirer of Mondrian’s early work because the Marmottan was the collection of a single person too, Monet’s son. But for this exhibition, establishing a connection between Monet and Cezanne is not the point. Yes, Cezanne painted with the Impressionist Camille Pissarro from the 1860s and exhibited with the Impressionists in the 1870s. But Cezanne’s stated goal was to ‘make of impressionism something solid and lasting like the art in the museums’. Pretty funny if you think about it, since this exhibition is at a museum of Impressionist art.

According to the curators, this exhibition takes a ‘very novel approach’ to Cezanne because it seeks to establish the influence ON Cezanne of Italian artists or artists working in Italy during the 16th & 17th centuries and the influence OF Cezanne on 20th century Italian artists. Well, I agree, that is novel and more than a little odd since Cezanne never traveled to Italy, and at least one of the Italian artists he influenced, Giorgio Morandi, never left Bologna. Actually, Morandi may never have left his mother’s house in Bologna, but that is a topic for another day.

So, how did Cezanne, a homebody who mostly painted in and around his beloved Aix en Provence, know Italian art? The way most people did and do, through paintings at museums and prints in illustrated books. And what proof do the curators have that Cezanne was influenced by Italian art if he never traveled to Italy. Did he reference Italian artists in his letters? Only rarely. So where’s the proof ? Instead of looking for documentary proof, the curators have taken a visual approach, analyzing and comparing paintings. This is old fashioned Art History: Describe, Analyze, Interpret. I am fond of interpretation, equally fond of contextualization. I want to learn what an object or work of art meant when it was produced, what it meant over time and what it means to us now. But let’s go along with the curators on this voyage to Italy and see what they want to show us.

Two paintings by Cezanne are compared with two by Tintoretto, the Venetian late Renaissance master. Both of Tintoretto’s paintings date from the 1580s, both of Cezanne’s from the 1870s. Tintoretto’s ‘Descent from the Cross’ (Figure 2) 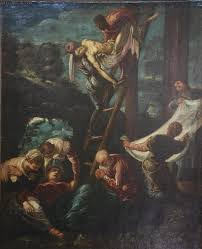 Figure 2 Tintoretto’s ‘Descent from the Cross’

is compared with Cezanne’s ‘Strangled Woman,’ 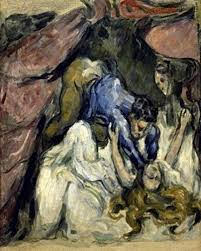 and the former’s ‘Lamentation’ (Figure 4) 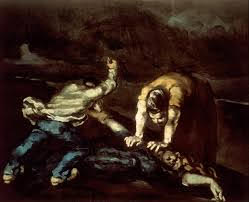 Sharp diagonals, gesticulating figures, especially flailing arms, define both works. While the Italian artist’s works are from the standard repertoire of religious paintings, Cezanne’s are reportage, illustrations of current events. They remind me of Daumier (Murder on rue Transnonain. (Figure 6) 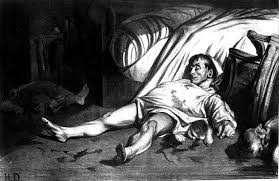 and Delacroix, a useful link here, given his passion for Italian art. Tintoretto’s paintings are defined by colore (color), Cezanne’s by thick impasto. Yet both paintings are filled with emotion and drama and the unexpected comparisons between these two artists, work.

Next we go to Rome, specifically to the 17th century French artist Nicolas Poussin, whose career unfolded there. We don’t have to guess if Cezanne knew Poussin’s work because he wrote about him, declaring that he (Cezanne) was ‘recreating’ Poussin 'after nature”. Poussin’s classical compositions depict an ideal Arcadia, Cezanne wanted his paintings to ‘unite observation of nature’ with the ‘permanence of classical composition’. Poussin’s painting,‘Landscape with Bacchus and Ceres’ (Figure 7.) 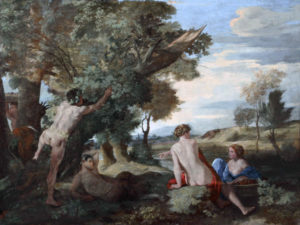 depicts a nude Bacchus, seen from behind, reaching for something in a tree, should be grapes, he’s the god of wine. A satyr (companion of Bacchus, male body, animal legs & hooves, constant erection) also nude, lounges nearby. Ceres, blue drapery falling from her shoulders, exposing her delicate breasts, leans against a rocky formation. Another female figure, seen from behind, sits on the same rocky formation, her lovely skin protected by red drapery, her lovely waist and buttocks exposed. 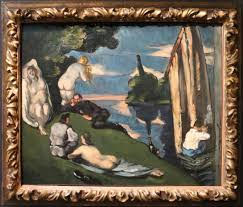 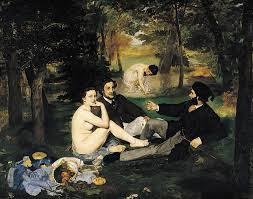 than to Poussin’s ‘Landscape’. Three women, one standing, one sitting, one reclining, all naked. Three men, two seated, one reclining, all besuited. I remember when our male professors (always male, students nearly always female) discussed Monet’s Dejeuner sur l’herbe. They told us that negative contemporary reaction showed a lack of knowledge about Renaissance art because Manet based his work on Marcantonio Raimondi’s ‘Judgement of Paris’. (Figure 10) 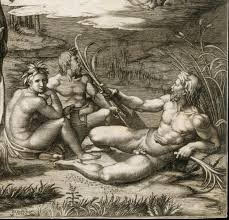 Female and male nudity dominated the art of antiquity and reappeared in the Renaissance. It is not the women’s nudity that is jarring, it is that Monet’s and Cezanne’s men are all in contemporary (19th century) attire. Let’s move on to the 20th century, that is, Cezanne’s influence on 20th century Italian artists. There is another painting of nude women by Cezanne called Bathers, compared with a painting of the same subject by Giorgio Morandi, who I have already told you, never left his mother’s house. I happily accept that Morandi’s work was based on reproductions of Cezanne painting, how else to explain it.  But I will let you discover those paintings for yourselves. Another Morandi painting, a landscape, takes us to familiar Cezanne territory and I can’t tell you how lovely it is to see a version of Mont Sainte Victoire. (Figure 11) 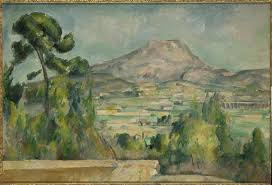 Flat patches of color built up and anchored give the solidity Cezanne sought in his quest to transform Impressionism. With his still life paintings too, solidity reigns and we are reminded of Cezanne’s goal to 'treat nature in terms of the cylinder, the sphere and the cone”. (Figure 12) 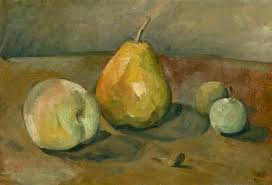 And we are back to Morandi once more as he is indeed best known for his magnificent still life paintings. (Figure 13) 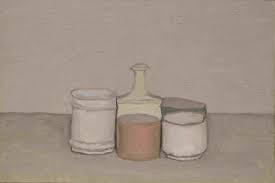 The comparison between Cezanne’s still lives and Morandi’s is a bridge easily built and nicely developed. Yes Cubists took Cezanne’s experiments in one direction, fracturing his surface to introduce time and multiple viewpoints. The Italians in this show take us in another, equally interesting direction. Fingers crossed that we will soon be liberated from our current confinement and thus able to go to an excellent exhibition in a beautiful museum in a beautiful city, just like we used to do.

What a wonderful review. Makes me wish I had known about this museum and been able to visit it before the lockdown, although the richness of the descriptions makes me feel like I have experienced some of its emotion. Will definitely be on my list for my next trip to Paris when life is calmer.