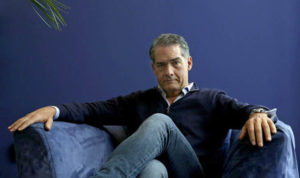 I discovered Phillip Kerr’ initial Bernie Gunther case, MARCH VIOLETS, in the used book MYSTERY/CRIME section of San Francisco Books, on the rue Monsieur -Le -Prince in Paris, and became immediately addicted. Having read the entire series, culminating in the latest volume PRUSSIAN BLUE, I can only hope that he learns to write faster. He did and didn't-after publishing GREEKS BEARING GIFTS and the soon to be published METROPOLIS,  he sadly passed away in 2018 at the far too young age of Sixty-two.

These novels set in Weimar Germany, Nazi Germany, with side trips to Cuba and Argentina, place a career detective in the unenviable position of solving the usual gamut of crime: murder, robbery, rape, all under the watchful eye of the SS and the Gestapo. Bernie is Phillip Marlowe with a German accent.

TG: There is seemingly no end to books about the Third Reich. Why this subject for you?

PK: It's the most important historical event since the Protestant Reformation, five hundred years ago - also begun by another German anti-Semite, Martin Luther, whom Hitler greatly admired. So the political and historical importance of what happened in 1933 cannot be overstated; the consequence are with us always. To me Brexit looks not unlike our first Brexit in 1536 when Henry VIII pulled out of a Catholic German dominated Europe.

TG: Why a detective story?

PK: Policemen are always good protagonists because they are always at the sharp end of a story; they uncover a story, and to this extent they are a useful tool for any novelist. Many characters in a great many classic novels behave like detectives in all but name. Nick Carraway in The Great Gatsbyis a kind of detective, and Gatsby is his mystery.

TG: I was astonished when I first learned that you were a Scot. Your descriptions of Berlin have the feel and verisimilitude of a native. Did you spend a great deal of time in Germany to do the research?

PK: Yes. I walked around Berlin in the mid eighties and generally behaved like a detective myself. All novelists need to get off their butts and WALK. It's the best research there is since you are able to place yourself in the topography of a story.

TG: Who were the crime writers who influenced your style?

TG:  Bernie has the snappy patter of Phillip Marlowe. “Kreuzberg was the kind of place where even grandmothers carried a switchblade, or at least a long hat pin.” Do the wisecracks come before the story, added later, or are you so in character that they just tumble out?

PK: I don't bake them in advance; I wouldn't say they just tumble out but I usually sit there and try to imagine the smart thing to say. I have a very black sense of humour and a smart mouth; a typical Scot.

TG: Do you speak German? Not only did you capture the argot, but the argot of the 30s, almost like a perfectly translated film noir. Your use of vernacular as in an exchange between Gunter and an old colleague from his days at the Berlin PD: “I’ll buy that. So, then. We’re looking out for each other. Right? Not friends. No. Too much laundry there. But perhaps–perhaps we’re Bolle boys from Berlin. Agreed?(Bolle was a Berliner’s word for the kind of pal that you made when you were drunk.) Talk about that process.

PK: I am to writing what Robert de Niro and Lee Strasberg were to acting. I believe in Method. I try to immerse myself in the character the place and most importantly the language. Language is always the key. I read a lot, and work on my German slang quite a bit. This is the texture of a novel - how people speak.

TG: If Mel Brooks were conducting this interview he would want to know who were your “ favorite” Nazis. e.g. Heydrich is a regular character. Explain your choices.

PK: This is a difficult question in that it implies I like some of them. I do think many of them were Machiavellian opportunists and cynical careerists. Heydrich fascinates me because he's everyone's idea of the ruthless Nazi. Which he was. If I was to pick two to have dinner with they would be Goering and Goebbels. Goering because the food would be good and Goebbels because he himself was a novelist.

TG: Does the Tom Hanks blurb suggest that he is planning to star in or produce an Bernie Gunther movie? If not are there any offers from Hollywood the BBC or ITV Granada?

PK: Tom Hanks is a longtime fan of the Bernie Gunther novels, as are many other high-profile entertainment industry insiders.  Woody Harrelson also shared his fandom for Bernie Gunther publically last fall.  There is no news at present about a film/tv adaptation of the novels.

TG What is Bernie’s next case?

PK: It's set in Greece. And that's all I can say for now.

I got turned on to these novels by friends auditing a "crime noir" course, sad to hear he died. So young.