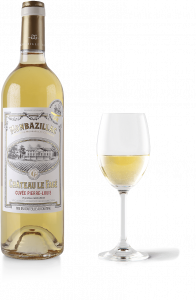 After twelve generations in the same family Chateau Le Fagé can claim to be one of the Bergerac’s oldest vineyards and it boasts some of the classic terroir. Looking south from Bergerac, you see across the river Dordogne the long ridge, dominated by that Renaissance gem, the chateau de Monbazillac, then as the eye moves to the west you see the stone tower of Malfourat and less than two miles further west stands a discreet but charming chartreuse, Le Fagé.

These north-facing slopes on the left bank of the Dordogne are the classic terrain for the sweet and golden wine of Monbazillac for which Le Fagé is renowned. I was one of the judges who awarded Le Fagé the first prize at the concours of Monbazillac wines in 2019. Another year, I was a judge when Le Fagé took three of four places in the semi-finals.

There is hardly a prize their wines have not won. In last year’s Concours Générale in Paris, two of its Monbazillacs, the Grande Réserve (22 euros) and the Cuvée Pierre-Louis (16 euros) each won a gold medal. And so did its Cuvée Prestige Bergerac red wine. The Grande Réserve also won gold at the Concours of the Independent Winemakers of France. The year before that the Cuvée Pierre-Louis won gold at the Independent Winemakers and the Bergerac Cuvée Prestige red (12.50 euros) won gold at the Paris Concours. The standard Begerac red (8 euros) won a silver medal.

These are extraordinary results, displaying a consistency of quality in red wines as well as Monbazillacs. And did I mention that their Bergerac Sec white wine 7.50 euros) also won a gold at Paris? Or that they have won more medals from the Independent Winemakers than any other vineyard in France?

Benoît Gerardin, with his trim build and iron-gray hair, is a fit and palpably healthy and energetic man in his forties, who seems incapable of making any but very fine wines indeed. On a recent visit, I tasted my way through the whites, the rosé, the reds, the Monbazillacs and there wasn’t a wine that was not just very good indeed but also they were inviting. Whether it was the freshness and balance of the white wine, or the soft and slightly spicy reds, or the majestic Monbazillacs, they seemed unpretentious and welcoming but also serious. That is a rare and very pleasing combination.

“I call it drinkability,’ he told me (buvabilité was the word he used). ‘Anyone can make sweet wines but it needs to have freshness, too, a lightness of heart. That’s something unique to our Monbazillac region. The Sauternes don’t have it.’

‘Wine has to be about pleasure, conviviality, sharing good moments at table with food and friends, a glass of white wine to open the appetite and the conversation,’ he went on.

‘But this is also a business. I have wages to pay for six full time employees, and since I’m an independent winemaker, not part of a cooperative, I have to make wine that sells. I need to find that balance between the wines we want to make and the consumer. In a way I think we’re lucky not to be in the Bordeaux where the prices have gone so high that they have lost touch with the customer. That gives us an opportunity.’

There are 39 hectares of wines at Le Fagé, two-thirds planted in white wines, mostly sémillon (75 percent), with 20 percent sauvignon blanc and five per cent muscadelle. For the first time, thinking about the growing challenge of climate change, they have planted some Sauvignon Gris and some Chenin as an experiment. If the hot summers continue, Benoît thinks, he may have to think about planting some different varieties, perhaps Syrah or Grenache.

‘One of the problems of Covid for me is that we have not been able to attend the usual wine salons, particularly those with the independent winemakers, where usually we chat about the various challenges we face and learn what other colleagues have tried and how well it works,’ he said. ‘You can learn a lot at these sessions, and my father was a passionate supporter of the association of independents.’

Francois, his father, launched the independent winemakers in the Bergerac region in 1986 and became president of the national association in the years before 2000 when Benoitt decided to join the family business.  He began learning  the trade with three years in commerce, working for a big négociant in the Bordeaux, learning the commercial side of the business, and came back home full of ideas.

His biggest project was to transform the watering system and the drainage to be sure that the vines had only clean rainwater. He pulled out some old vines and planted new ones, modernised the chai where the wine was made, bought new oak barrels and invested heavily in the future.

Chateau Le Fage now makes almost 250,000 bottles a year, is evidently prosperous but Benoît says he has no idea whether his young children will follow him in the family business that began with Protestant ancestors just as King Louis XIV launched a new round of persecutions. It drove some 300,000 French Protestants into exile, in Britain and Holland and left at least as many fake ‘Catholics’ behind trying to save their skins.  At least their exile drove a new wave of marketing for their Monbazillac wines.

The family prospered in the18th and 19th centuries, building the chartreuse in the time of Napoleon III, but then came the vine-killing plague of phylloxera and only in the 1920s did the place stop being an all-purpose farm, with crops and cattle sharing space with the vineyards. It was Colonel Albert Géaud, coming home from the trenches after the 1914-18 war, who began bottling his own wines in 1921. He went on to became mayor Pomport but tragically lost his son in WW2. His daughter Francine, married Maurice Gerardin, a former WW2 pilot, and they renovated the chai and began planting red wines. Benoît is their grandson, planting new laurels on a fine family tradition in one of the great vineyards of the Bergerac.